What We Ate Wednesday--One Pot (really and truly) Pasta

Hello lovelies! If you hang around social media long enough, eventually *someone* will be talking about One Pot Pasta. This idea is everywhere! You cook everything in one pot. One pot, people!

I put it to the test to see if this was too good to be true.

It is NOT too good to be true.

It is gorgeous and quick and easy. And did I mention delicious???

Most recipes I saw folks talking about used spaghetti and we just don’t roll that way.

We like pasta shapes (shells in particular) and didn’t want a recipe that fed a crowd.

There are only two of us. Two’s company and three’s a crowd.

Although technically this recipe could have fed three people. Perhaps that should read Two greedy people are company and three people can sod off so there is more for the greedy pair.

So, I looked on google until I found recipes that fed 2-3 people and used pasta shapes so I would know how much liquid to add to make the ratio correct. Then I ignored their choice of ingredients and used vegan ones I know we like.

I also put it to the timed test. I had been on a video call with my daughter Monjae and we got off the phone late. I had 15 minutes before Spiderman would be home from work. Could I get it together by the time he got home? 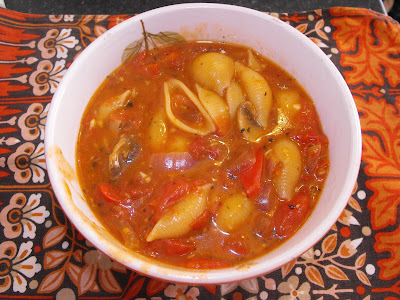 In a big pot put the following:
1 chopped onion
Half a chopped pepper
1 small carrot, diced small
3-4 cloves chopped garlic (or to taste)
5 button mushrooms, sliced
6 sun dried tomatoes, snipped into bits
Punnet cherry tomatoes, cut in half (mine cost 69p and was 330g)
Splash of water to keep it from sticking

1.Start to heat the pan with everything in it whilst you boil your kettle.
2. In your kettle boil 2.5 cups water.
3. Add the following to the pot:

4. Pour over the boiling water and bring to the boil. Boil as long as it takes for your pasta to cook (my Gluten Free pasta takes 8 minutes). Make sure you keep stirring so it doesn’t stick.
5. When your pasta is cooked, the sauce will be done. The tomatoes will have burst and made a delicious sauce. Ours seemed a wee bit runny so I added a slurry of 1 TB starch (like corn starch/cornflour to my British peeps) whisked with ¼ cold water. I added this and kept stirring until the sauce thickened slightly.

How long did it take? Probably 15 minutes start to finish.

Was it tasty? Oh yeah. We topped ours with some vegan Parmesan. It was quite saucy (oo-er, Mrs!) so we ate it with a spoon.

It could easily be doubled if you have more than two greedy people to feed.

This will definitely be in our rotation of meals we need super-duper quick because we have both just gotten in from work and are tired.

We were discussing that you could make variations on a theme. We were thinking of a Mexican version keeping the same veg and cherry tomatoes, but subbing Chili powder for the oregano and basil and adding black beans and sweetcorn and topping with a squeeze of lime juice and a drizzle of cashew cheese sauce.

We shall report back if we give this one a go.