Last week we looked at a version from China called Grandmother Wolf. This week’s version is a variation on that same tale entitled Lon Po Po (Lon meaning wolf and Po Po meaning grandmother) translated and illustrated by Ed Young. This book was awarded the Caldecott medal for best illustrations in 1990. 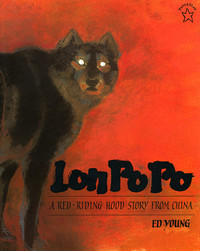 I considered lumping these two tales together as they are both Chinese and feature Grandmother Wolf, but this darkly illustrated story really deserves its own post.

There are many similarities to last week’s tale such as there are three sisters who outsmart the wolf. There is also the same “death by ginkgo” for the wolf.  There are differences as well such as Lon Po Po doesn’t contain the scatological scene from Grandmother Wolf.  In Lon Po Po one of the sisters says "your foot has a bush on it" when she touches the tail and when the claws are touched it is remarked "your hand has thorns on it."  Many of the lines are nearly the same ("The chickens are in their coops") which suggests the Ed Young was highly influenced by the other version.

There are several videos where someone reads the terrific tale of Lon Po Po while showing you the pictures. If you bought the book with the audio CD, you would have heard the story performed by the great actor BD Wong. I found a version of this online, but it was audio only. If you want to hear his voice, I will include a link to it below.

I chose a version that shows the pictures as well as tells the story.


The BD Wong version. it really is the best reading of it. Such a shame it is audio only.

Stay tuned next week for a tale from Korea featuring a tiger posing as the mother of three sisters.
Posted by Heather Tisdale at 08:28