What We Ate Wednesday--Good Gravy

Hello lovelies! I don't know about you, but a good gravy makes every dish better.

Maybe not *every* dish. I mean you wouldn't put gravy on ice cream.

Or would you? No, that would be weird.

I never made meat gravy before I was vegan. I probably ate it. I ate gravy other people provided, but had no idea how it was made. A lot of my omnivore days were like the US military--DON'T ASK, DON'T TELL. Basically, I ate lots of things as long as I didn't have to know what was in them. I became increasing uncomfortable eating animals that looked like animals. A chicken has a leg and  I have a leg...making the connection...wait! Don't ask, don't tell! I ate lots of chicken strips because strips aren't a body part.

Anyway, back to gravy.

To paraphrase Flannery O'Connor--A Good Gravy Is Hard To Find.

I have tried vegan gravy powder...convenient, but too salty. I used to make one that was a creamy gravy made with cashews, but it got expensive (and was just ok, if I am honest.) I had a great recipe for a flavourful gravy from a cookbook by Dreena Burton, But it had thirteen (count 'em, 13!) ingredients and like the cashew one required a blender. I went without a decent blender for two years after I accidentally broke my beloved Vitamix blender. I could blend it up in my inferior blender, but it took about ten minutes to collect all the ingredients, measure, blend for ages in my crappy blender, put all ingredients back where they belonged--which for me is the next room because my kitchen is so small. It just wasn't worth it.

So, I went to Google and started looking for a recipe.

And I found it. The Holy Grail of gravy. It was delicious, few ingredients, easy to make and no blender required. My Vitamix has been repaired, but i don't need it for this. I can whack out the gravy really quickly whenever I need a bit of some deliciousness. And did I mention it is fat free? I am not fat phobic by any means -- we need fat in our diet -- but this gravy tastes scrummy without it, so I can save my fat for something like dessert.

The recipe I adapted my gravy from is from Brand New Vegan  and you can read the recipe HERE.
Their recipe uses whole wheat flour, but I used rice flour. So, all you folks who don't have to be GF, can just you whole wheat flour. 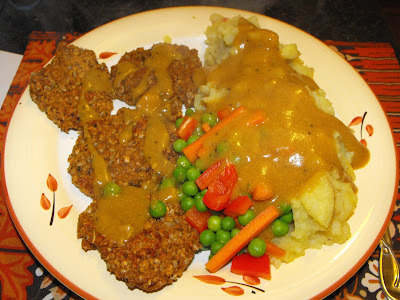 2.Whisk the dry ingredients together over med-low heat until they become toasty, no more than a few minutes. It will start to smell all toasty and delicious.

3. Slowly stream in the veggie broth and whisk to remove any clumps.

4. Now add the tamari or soy sauce and the optional marmite and stir to combine.

5. Simmer on med-low heat until bubbly and thickened

That's it. I think this gravy would travel well. Sometimes Spiderman and I rent a self catering place on a holiday. You could bring all the dry ingredients in a container and some tamari or soy sauce in those travel shampoo bottles (clean ones...not ones that have previously had shampoo in them, obviously!) Then you could make gravy on holiday.

I have searched far and wide for a vegan gravy that is easy, cheap and delicious with a short ingredient list and this one wins--hands down--every time.

Posted by Heather Tisdale at 01:39