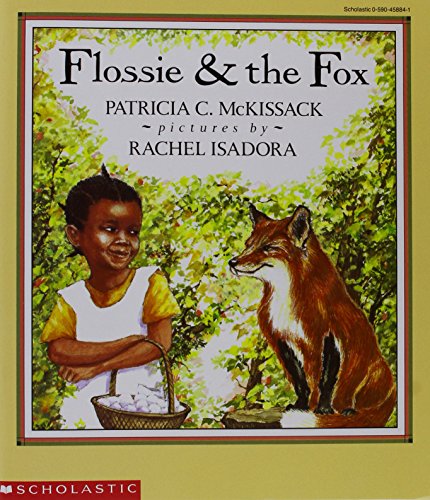 This week we look at one of my favourite books of all times: Flossie and the Fox written by four time Coretta Scott King award winner (three books and a lifetime achievement award) Patricia McKissack. It is also superbly illustrated by Rachel Isadora.

by her grandfather while sitting on the front porch with her family during hot summer evenings in the South. This story does not begin with: Once upon a time.  Instead, Grandfather would open with a question: “Did I ever tell you about the time…”  which engages the reader so much more.

This is the tale of young Flossie Finley from Tennessee, charged with safely carrying a basket of eggs to Miz Viola's place because a fox has been worrying her hens. Just like many versions of this tale, a young girl must travel alone on a mission through the woods and encounter a beast. Young Flossie is not given a path, only a destination. (She chooses the woods because it is shady and cooler than the main road.) She is told by Big Mama to watch out for the sly fox. Flossie "disremembers" ever seeing a fox, but Big Mama explains "Chile, a fox just be a fox." And here is where our adventure begin, not with a wolf but with a very overconfident fox.

As in other tales of this sort, Flossie is approached in the woods by the enemy animal. He is extremely proud of himself, but Flossie refuses to be frightened until he can prove that he is who he says he is. Her cleverness and ingenuity mess with his self esteem and he becomes a quivering wreck trying to prove that he is a fox. Every argument he puts forth (a bushy tail or pointed nose) is met with a counter argument he can't refute. Flossie tells him a squirrel has a bushy tale and a rat a pointed nose. It is only at the end when she is safely at her destination does she reveal that she knew all along.

This is a welcome version of Little Red Riding Hood. In a sea of damsels in distress, Flossie is a plucky heroine and role model.

You can watch a video here where someone tells the story and shows the pictures.

And just for fun, a close up of my favourite illustration in the book--the final page.

Stay tuned next week for another clever heroine and a rather foolish wolf.

Posted by Heather Tisdale at 23:59