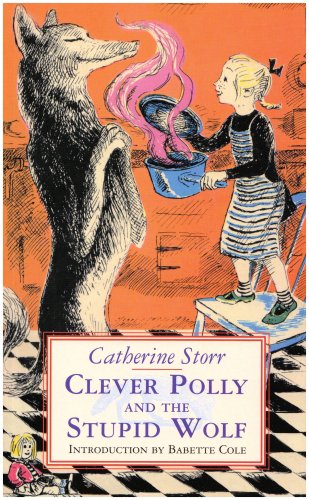 This week we are looking at a chapter from the very funny book Clever Polly and the Stupid Wolf  by Catherine Storr.

This book was originally published in 1955 and was written as a response to Storr's daughter Polly's genuine fear of wolves. Five year old Polly had seen wolves at Whipsnade Zoo in their tree filled enclosure and developed a phobia, so her mother wrote these hilarious tales where in each chapter the increasingly  misguided and foolish wolf is defeated and outsmarted by young Polly.

The chapter I want to look at today is entitled Little Polly Riding Hood. Here, Polly is on her way to visit her grandmother. The wolf, who has recently read Little Red Riding Hood becomes increasingly exasperated when Polly's answers do not match the exact dialogue from the book.

When he asks Polly "Where does your Grandmother live?" She answers "Over the other side of town." This makes the wolf frown, because as we all know the answer should be "through the woods." When he asks how she will get there, Polly replies "First I take a train and then I take a bus." This makes the wolf howl in outrage and stomp his feet. "No, no no!" he shouted. "You have to say something like 'By that path winding through the trees' or something like that. You can't go by trains and  busses and things. It isn't fair!"  When Polly explains that there is no other way for her to get to her Grandmother the wolf replies:"But then it won't work,"said the wolf impatiently. "How can I get there first and gobble her up and get all dressed up to trick you into believing I am her if we've got a great train journey to do? I haven't any money on me, so I can't even take a ticket. You just can't say that."

The whole book is as funny and surreal as this. It is well worth checking out from your local library.

I have found a PDF version from the Norton Anthology of Children's Literature that you can read. You'll need to scroll past the title page, but the story begins on page four (a quick biography of the author is on page three if you would like to read it.)

Stay tuned next week when we begin to delve into versions of Little Red Riding Hood written in dialect.

Posted by Heather Tisdale at 01:47