Hello lovelies! Have you ever heard of Coronation Chicken? It is a British thing, apparently. It was invented (as the name suggests) for the coronation of Queen Elizabeth II in 1953. Basically, it was cold chicken in a creamy sauce (some recipes specify mayonnaise others crème fraîche) mixed with curry powder and something sweet like flaked almonds or raisins. This was pretty radical in the 1950's. Curry powder would have been quite exotic.

Jack Monroe, my favourite budget blogger had a recipe for a CORONATION FRICKIN' BURGER that looked good, but I couldn't be bothered to faff about finding Gluten Free breadcrumbs and making burgers. So, I just used her basic recipe and made Coronation Chickpeas.

I was attracted to Jack's recipe because there was no mayo in it. I was never one for eating mayonnaise even before I was vegan. It has a lovely sharpness due to the turmeric and garam masala and a sweetness due to the raisins and the mango chutney. Yes, this recipe uses mango chutney for a fast flavour punch. We buy one that costs 89p a jar from Lidl and is as good as the Geeta's brand that costs around £3. If you are a purist (or a Royalist) then feel free to add some soya yogurt or or vegan mayo, but I promise it is absolutely gorgeous without it.

I made it two different times, once with peas and once with kale. Both times the green vegetable went nicely with the yellow/orange colouring of the turmeric and chutney. I also used dried cranberries as that is what I had on hand.

I also served mine with roast potatoes. 400g potatoes cut into chunks. Coat with 1 TB tapioca starch (or cornflour or arrowroot), 2 tsp garam masala, salt and pepper and I TB oil. Roast in a greased pan at 220C/425F for 13 minutes, stir then 13 more. But you could just as easily serve it with rice. 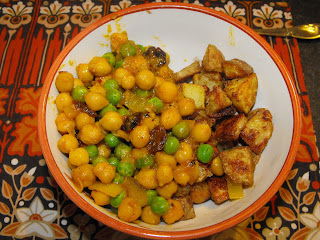 A Sort of Coronation Chickpeas

1. Cook the onion in oil or a splash of water until soft.
2. Add the dried fruit and spices and stir to coat. Add chickpeas and mango chutney. Simmer on low, stirring occasionally.
3. When potatoes or rice is nearly done, add the peas or kale/spinach and cook until peas are defrosted or kale/spinach has softened. 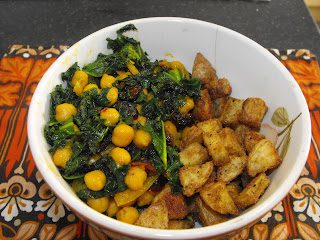 As I said above, you can add a few spoons of something creamy if you must. But it is gorgeous as is.

You don't even have to be a Royalist to eat it.

Posted by Heather Tisdale at 00:04