For the past three weeks we have looked at versions of Little Red Riding Hood written in dialect. Now we are going to look at some more humorous versions of our tale.

This week we start with the classic  The Little Girl and the Wolf by James Thurber. Thurber was a cartoonist and one of the most famous humorists of his day. He was also well known for his short stories such as The Catbird Seat, The Night the Bed Fell and The Secret Life of Walter Mitty (twice made into films.) His terrific use of satire was highlighted in such works as The Unicorn in the Garden. He was also the author of several wonderful children's books The 13 Clocks and The Wonderful O.

Interestingly, he was virtually blind in one eye due to a childhood accident where his brother shot him in the eye with an arrow while they were playing William Tell. He also suffered from Charles Bonnet syndrome where a person with a loss of vision suffers from complex visual hallucinations. Because of his failing eyesight, his cartoons had an eerie, wobbly feel to them.  He once wrote that people said it looked like he drew them under water. Dorothy Parker, a contemporary and friend of Thurber, referred to his cartoons as having the "semblance of unbaked cookies." (according to Wikipedia.) 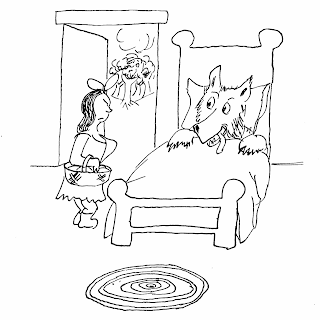 The Little Girl and the Wolf

When the little girl opened the door of her grandmother's house she saw that there was somebody in bed with a nightcap and nightgown on. She had approached no nearer than twenty-five feet from the bed when she saw that it was not her grandmother but the wolf, for even in a nightcap a wolf does not look any more like your grandmother than the Metro-Goldwyn lion looks like Calvin Coolidge. So the little girl took an automatic out of her basket and shot the wolf dead.

(Moral: It is not so easy to fool little girls nowadays as it used to be.)

Stay tuned next week for a Revolting Rhyme.
Posted by Heather Tisdale at 00:48