Hello lovelies! I take my food inspiration from where I can get it. I read all sorts of recipes (not just vegan ones) and sometimes I see something and think, "I can make that vegan!!"

This was the case when I saw one of those quick cooking demo recipe videos that people post on Facebook. This was posted by someone I know who was a meat eater, but I was fascinated by the recipe. It was for Philly Cheesesteak Stuffed Pasta Shells.  I kept looking at it and thinking, "I could substitute lentils for the ground meat!" and "I could just use vegan cheese sauce made with nutritional yeast!" And most importantly of all, "I could just use regular GF pasta rather than faff about with stuffing the filling in giant pasta shells."

Ain't nobody got time for that.

I have a recipe for Savoury Lentils that I adapted from Dreena Burton's cookbook Eat, Drink and Be Vegan. I thought it would make a terrific ground beef substitute. The cheese sauce in the video was made half with milk and half with beef broth. I could just make a beefy stock with tamari/soy sauce and Marmite. (or rather Tesco Brand Yeast Extract, because real Marmite is owned by Unilever who tests on animals.)

We had it and it was OUTSTANDING. weirdly, it reminded me of Chef Boyardee from my childhood. The lentils make enough for two meals, so once we had lentils with roasted broccoli and lemon roast potatoes, but the second day we had it as Philly Cheesesteak.

I think from now on we may just have to have it as Philly Cheesesteak two days in a row. It was that good. 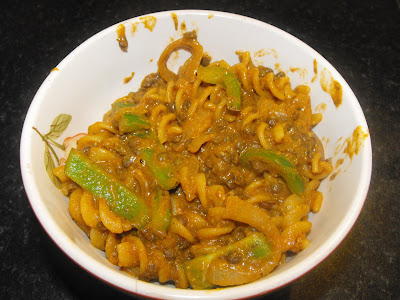 1. Put everything in a medium pot and bring to the boil. Reduce heat and simmer until most of the liquid is absorbed and the lentils are soft. About 30 minutes.
2. Put half the cooked lentils aside to cool and refrigerate for another meal the next day.

While the lentils are cooking:
1. Cook the (GF) pasta according to package directions. For two people I used 1.5 cups pasta.

In another pot cook:
one onion sliced into rainbows
one sliced green  pepper
2 TB tomato puree/paste
1. When ready, add half the lentils and heat until piping hot.

In your pot with onion, green pepper and lentils add the cooked pasta and hot cheese sauce and stir to coat.

This is so good. Comfort food at its best. It really reminds me of eating Chef Boyardee from a can, but in a good way.
Posted by Heather Tisdale at 23:50