Hello lovelies! The heatwave has come upon us and I want to be in and out of the kitchen as quickly as possible.  But I still have a sweet tooth and want a little smackeral of something sweet after our evening meal. But it has to be a no bake sort of affair. Something that is made in the freezer and lives in the fridge. Something quick, but delicious.

Hello Peanut Butter Cups. Or rather Peanut Butter Bars because I don't time to faff about with putting them all in single use paper muffin liners.

Ain't nobody got time for that.

I also can't be bothered to coat them in chocolate all the way, and that''s OK too. These really have more than a passing resemblance to those Reese's Peanut Butter Cups of my childhood without having nineteen ingredients (nineteen ingredients, people!) which include 2 kinds of hydrogenated oil and rather more worrying PGPR. Wikipedia says:

Reese's Peanut Butter Cups are made with the controversial ingredient PGPR (Polyglycerol polyricinoleate, E476, a.k.a. Palsgaard 4150), which is used as a replacement for cocoa butter. The FDA has determined it to be "safe for humans as long as you restrict your intake to 7.5 milligrams per kilogram of body weight.

Um...that's a big fat NO THANKS from me.

I adapted the peanut butter layer from this recipe on the blog of BEAMING BAKER.  For the chocolate I literally melted a chocolate bar and poured it on top. Beaning Baker got all fancy with drizzles and sprinkles of chopped nuts. I just did good ole PB with Chocolate on top.

And you know what? It is fine. More than fine. it's like a Reese's Cup but with ingredients you can pronounce.

Some  ingredient information:
1.I use Meridian brand peanut butter whose ingredients are as follows: PEANUTS.
2.You could use any form of liquid sweetener like agave or maple syrup, but those are expensive. I used Lyle's Golden Syrup.
3. I got my coconut flour for cheap (£2.99 for 500g!) at GrapeTree.
4. The Nutritional Yeast is totally optional, but i read that it gives it a more "authentic" Reese's Cup taste.
5. I buy a 39p dairy free 100g chocolate bar with 50% cocoa solids from Lidl. It gives it a more milk chocolate taste without the milk. If you want to use a more expensive posh choc bar, by all means go ahead. If you are desperate to make this and have no vegan chocolate bar just hanging around then melt 1/4 cup coconut oil and stir in 1/4 cup liquid sweetener and 1/4 cup cocoa powder and use that. This supposes you just have these ingredients just hanging around, so if you don't you're out of luck til you go to the shops. 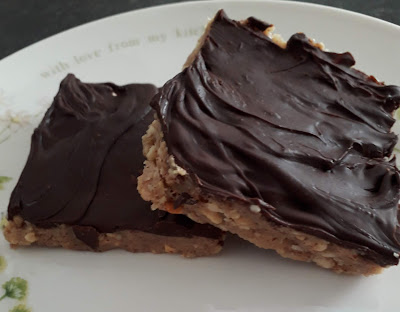 Peanut Butter Cup Bars
Line an 8 by 8 square pan with parchment paper. Clear some freezer space if you need to. 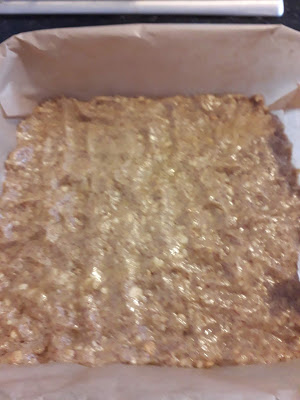 Mix until it forms a soft, slightly tacky dough. Press it down with damp fingers until it forms an even layer. Pop into the freezer to harden while you melt your chocolate.

In a double boiler (basically a glass bowl sat atop a pan with an inch or two of simmering water) or the microwave carefully melt 100g of chocolate. This is perfect because most chocolate bars come in this size. If microwaving, check every 30 seconds and stir to prevent scorching.

When melted, use a spatula to spread over the peanut butter layer that you just took out of the freezer. When all the chocolate covers the peanut butter layer, go ahead and cut your dessert into the desired number of pieces. Then pop it back in the freezer to harden up. When the chocolate has hardened it will break apart easily on your cut lines. Put into an airtight container and store in the fridge.

Most recipes like this says MAKES 16 SQUARES but I cut ours into 8 RECTANGLES because we are greedy vegans. Plus we are honest with ourselves. We know we are greedy. We're not going to pretend to just have one and sheepishly go back for two. We eat a huge-ass piece the first time and are proud of it.

Then you sneakily lick the bowl and think you've gotten away with it until your dear husband points out that you've got a little something on your face. 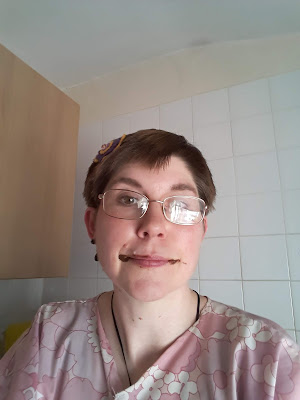 Posted by Heather Tisdale at 23:41