Last week we began to move away from literary versions of Cinderella and started to look at picture book versions. This story The Rough Face Girl was written by author and professional storyteller (as well as Zen Koan teacher) Rafe Martin and is based on an Algonquin Indian tale from the shores of Lake Ontario.  It is exquisitely illustrated by David Shannon who is probably best known for the delightfully silly No, David! series of books. These dark illustrations really compliment the beautiful writing by Rafe Martin.

This is a well told tale with elements we recognise in traditional Cinderella stories--a poor man had three daughters and the two oldest sisters make the youngest sister's life very lonely and miserable. They make her sit by the fire and feed the flames and the burning branches cause the flames to pop and sparks to burn her skin. Her hands,arms and face become marked and scarred by fire and her hair becomes rough and charred. The father seems as if he is intimidated by the two older sisters and does nothing to stop their torment. He gives them everything and has nothing left for his youngest. Perhaps he knows she will make the best of what she has, no matter how small it is.

In this village everyone wants to marry the Invisible Being ( a God who takes the place of the Prince) but you have to have seen him to be able to marry him.  He is fiercely guarded by his sister who  fulfils the role of magical helper as she can see the true beauty of the Rough Face Girl despite her outward appearance and helps her to be rid of her scars.

After her sisters' failed attempt to lie and say they had seen the Invisible Being, our heroine would like to try as she sees his face everywhere because she is pure at heart. Her father has no beads or new clothes to give her because he already gave everything away to the two sisters. Therefore she seeks audience with the sister of the Invisible Being wearing a dress make out of birch bark that she made, some broken beads and her father's old moccasins which are way too big for her. Despite her bizarre appearance, the sister sees her inner beauty right away. It is a wonderful tale of how inner beauty can be seen by those who are looking. 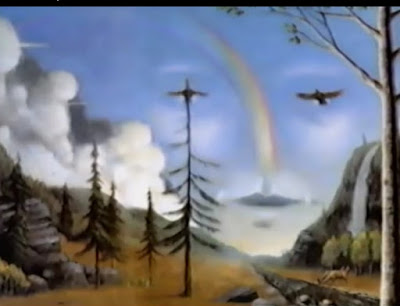 My favourite part of the whole book is the picture of how she sees the face of the Invisible Being everywhere. David Shannon has done an excellent job of making a face of God in Nature. As a Transcendentalist Quaker, this is the face that I picture when I think about God.

This is a beautifully told and illustrated tale and one of my favourite versions of Cinderella.


That's all for this week. Stay tuned for the tale of Adelita from Mexico.
Posted by Heather Tisdale at 00:49