What We Ate Wednesday--Korma Roasted Vegetables

Hello lovelies! I am a big fan of curry paste and it seems to have more depth of flavour that curry powder which can sometimes be chalky. There are lots of varieties of curry paste--we have used balti for years because the first recipe I ever cooked with curry paste suggested that one.

The newest Tesco magazine had lots of really good looking recipes that were vegan or easily adapted. One of the soup recipes called for korma curry paste. I have avoided korma curries when we have been to a restaurant as korma is a creamy curry and so is often filled with dairy, but as it turns out--the paste is vegan. Woohoo! It also has less oil than the balti paste, which is good as we are reducing our oil intake.

The one we buy is Patak's and a jar lasts for about 5 or 6 curries. Korma paste is slightly sweet, contains coconut and is mild. We tried the soup from Tesco magazine using the korma paste first--it was delicious but I didn't get a good picture. Well...I will just have to make it again then won't I? But this one was adapted from a recipe for Super Simple Chicken Curry Traybake. Like I usually do, I substituted chickpeas for chickens (they both start with ch, after all!) and it was a huge hit.

Except I accidentally forgot to put in the chickpeas. Oops. In my defence I was trying to have a video call with my mum at the time. It was still absolutely delicious and will be even more delicious with the addition of chickpeas. 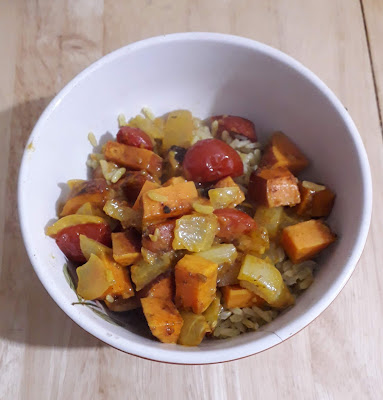 Korma Roasted Vegetables
Preheat your oven to 200C/400F
Add the following to your largest roasting pan:
1 large onion or two smaller, roughly chopped
2 medium sweet potatoes (about 500g?) diced
punnet cherry tomatoes, cut in half
tin of chickpeas, drained and well rinsed (or not if you are talking to your mum on the phone!)
1.5 TB korma curry paste

For later:
small tin of coconut milk or half a regular tin--around 3/4 cup
brown rice to serve

1. Put all your veg and chickpeas in your big roasting pan and add the curry paste. Stir well to coat all the veg with paste.
2. Roast for 15 minutes, remove from oven and stir. Add the coconut milk and stir again. Roast for an additional 15 minutes.
3. Serve over brown rice.

That's it. Most of it is hands off leaving you time to video call your dear old mum.
Posted by Heather Tisdale at 01:08