Hello lovelies! I was scrolling through all the various vegan Facebook pages I am on and this recipe caught my eye. I don't know which page it came from, or who posted it originally as I just did a quick screenshot to capture the recipe. For that I am sorry because I like to give credit where credit is due. The original recipe used Biscoff  spread so  know it wasn't one of the vegan and gluten free Facebook pages I am a part of because as lovey as Biscoff sounds the clue is the name--there are crushed up gluten-y biscuits in there.

But I tried it with peanut butter and it was mmm.

It makes in a jiffy out of stuff you probably already have in your kitchen. Then just bung it in the freezer until it hardens and viola! Fudge.

Top tip for my local peeps--you can get inexpensive coconut oil at B&M Bargains. 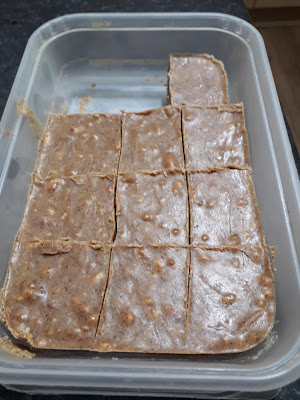 1.Carefully melt on low--15 seconds in a microwave if you have one, or on low heat on the hob. I do mine on the hob and melt the coconut oil first then add everything else.
2. Scrape the mixture into a small freezer safe container and freeze until solid.
3. Cut into 12 squares. This is really nutrient dense and quite filling so one square will do.
4. Keep stored in the freezer to keep its fudgy texture. 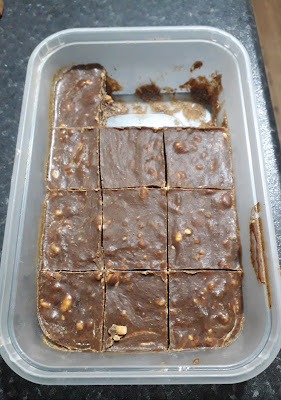 You can also make a darker fudge by subbing 2 TB blackstrap molasses for the syrup. It's good both ways.

This just melts in your mouth and is so good. It can be made in about five minutes plus freezing time and is great for a little pick-me-up.
Posted by Heather Tisdale at 02:01