This is not a Wal-Mart in America, people!

I noticed the other day that there were signs for Black Friday sales here in Wales. Say what? Black Friday is the big sale day after Thanksgiving (a holiday we don’t even celebrate over here! Although I never could get my East Texas grandmother to believe it) where crazy people all rush into a store in a frenzied manner and then beat the crap out of each other for bargain merchandise.

I was so cross when I saw the sign that I began a full tilt rant that caused me to swerve into an oncoming old lady for which I had to apologise profusely. Apparently I cannot be indignant and walk in a straight line at the same time. Go figure.

But my worst fears were justified as news coverage today describes near riots in several shops all over the country. According to BBC News:

Greater Manchester Police appealed for calm after attending seven Tesco shops, at which three men were arrested and a woman was hit by a falling television.


The force said the issues were "totally predictable" and it was "disappointed" by shop security. Tesco said only a "small number" of stores were affected.


Police were called in places including Dundee, Glasgow, Cardiff and London. 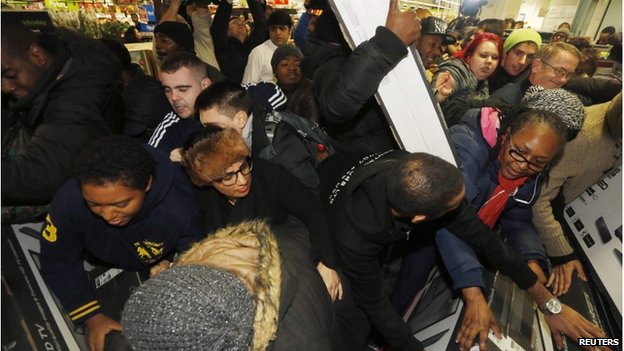 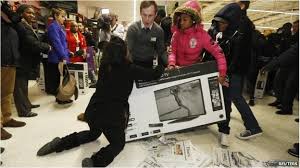 Jamie Hook was buying food at Tesco in Stretford on Thursday night when he said "the screaming started".


"I looked at the massive crowd to see people climbing over shelves and displays, staff running for cover, fights breaking out, stock flying through air, people breaking through carrying televisions - and this was before the sale had even started," he said.


"The lady on the till I was at was in tears, terrified of it all, but she was under orders to close her till to go and help crowd control."

What is wrong with us? Why are we becoming more and more like our American counterparts? Not in the good ways, but finding the worst and most savage and destructive behaviours and thinking, “Hey! I’d like to be like that!”

We’ll all be carrying guns next.
Posted by Heather Tisdale at 04:41 3 comments:

I often try to make a big pot o’ something that can be eaten over two meals just because I like the idea of cook once, eat twice and sometimes it can be a way of saving money. One of my new star cheap but healthy ingredients is pearl barley. I can buy a 500g bag of pearl barley for 55p and it expands as it cooks so you don’t need much to make a satisfying, wholesome, thick and filling soup. Make sure you buy PEARL barley and not POT barley--if you want supper on the table in a reasonable amount of time. Pearl barley cooks quicker. The bag says “simmer 45 minutes to 1 hour or until barley is tender” and I find it is ready to go in this soup in 30-35 minutes. Perfect! 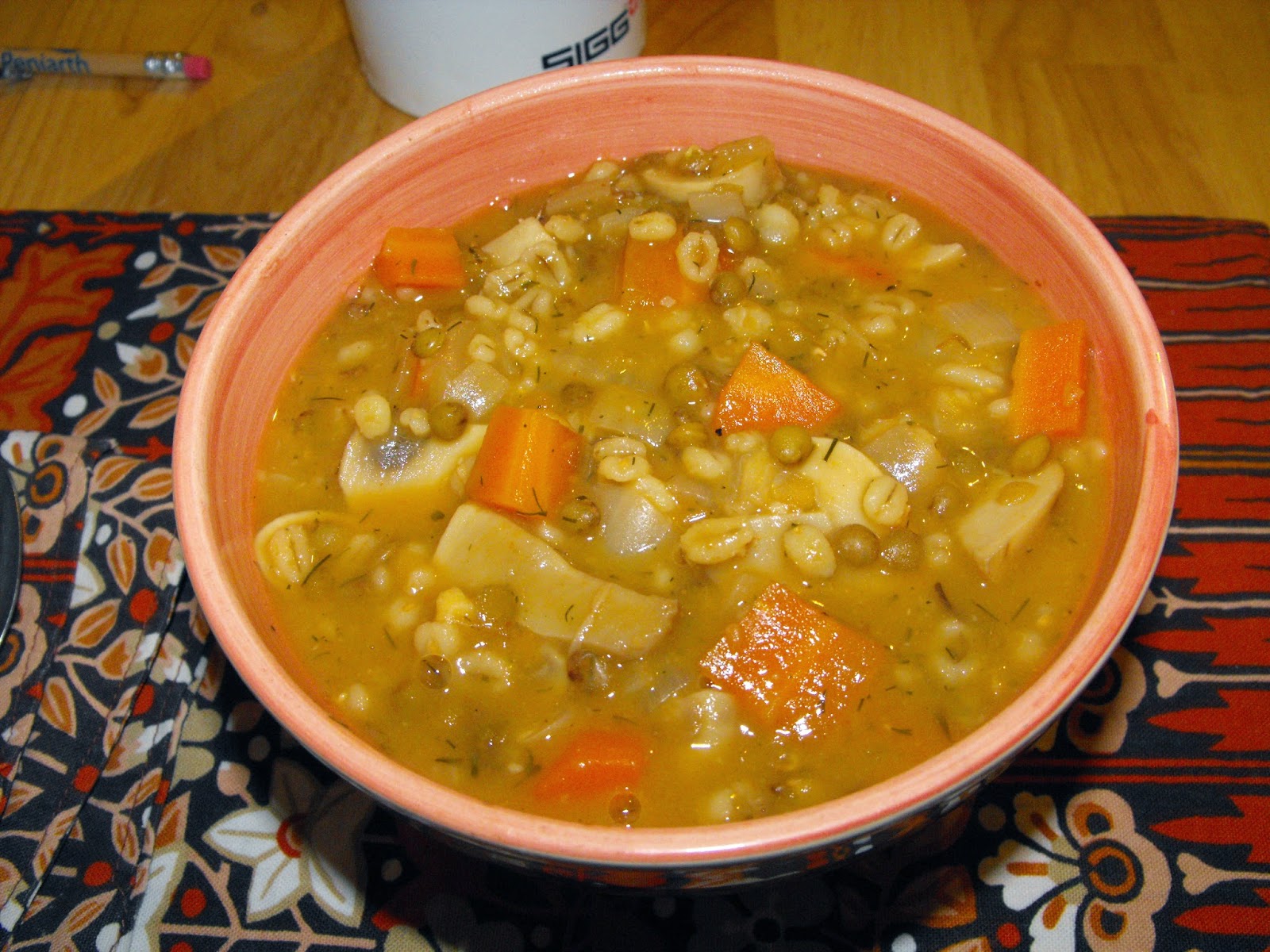 
7 cups vegetable broth, divided (save back one cup of broth for the end)


Optional: 50g de-stemmed kale, torn into bits if you happen to have some lying about like we often do (not in picture)

1. Cook the onion and carrots and garlic in a splash of oil until softened. Stir in dried herbs.


2. Add six cups broth, mushrooms, barley, lentils, tomato puree. Bring to the boil then reduce heat and simmer covered for around 30 minutes or until lentils and barley are tender.


3. Add the tamari (or soy sauce) and the lemon juice to the remaining cup of stock. When tender, add in remaining liquid.


4. Optional: if you have some kale lying about that needs to be used up, throw it in and cook until it wilts a bit (about 5 minutes)


5. Add the slurry and increase the heat until the broth thickens.

That’s it. This soup is hardy, stick to your ribs, but also using cheap ingredients like onion, carrot, mushrooms and barley. I have fallen back in love with carrots since we moved to Wales as they are a cheap ingredient (I can buy 1kg of carrots for around 55p) and they easily and healthfully bulk out soups and stews.

We have a big ole pot o’ something every Sunday and Monday night, because Monday night we have Welsh class. We just reheat, eat and then toddle on over to the university up the hill and spend three hours learning Welsh. It is a blast because we have the most amazing teacher who is so encouraging and fun. Martin makes us laugh and we learn lots of grammar and vocabulary but also with digressions of jokes and songs. Which to be fair, requires you to know grammar and vocabulary!

Stay tuned for a crash course in the Welsh language! But first, go make this soup!
Posted by Heather Tisdale at 03:55 No comments:

Pizza’s the food that sure to please….

…these Ninjas are into pepperoni and cheese. Honestly, I can’t think of pizza without thinking of Ninja Turtles. 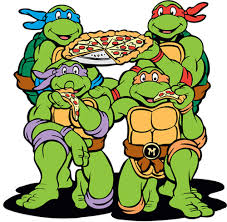 But I do love me some pizza. I used to be an extra cheese kind of gal. I once wrote a poem about things I hate which included the lines:


When I can’t find my keys.


Anything that makes me sneeze.

But these days being a health conscious vegan I don’t want all that greasy hormone and pus filled concoction on my food. Even when I was extra cheesy kind of gal I used to blot my pizza furiously as it was soaked in grease. Blech.

What I want these days in pizza is *flavour* and *texture* and *taste*. Now I can have it all.

I was lucky enough to have been gifted with a £10 book token as a leaving pressie when we moved to Wales and I have hoarded it, waiting for the right thing to spend it on. Well, I found it. Vegan Pizza by Julie Hasson. Whoa Mama, this is the cookbook of my dreams.

It is mostly a whole food cookbook which makes it healthy but decedent. Some recipes have the option of using shredded soy cheese for extra cheesiness, but we don’t tend to buy soy cheese as it is expensive and highly processed. She also includes several cheese sauce recipes that can be used including a smoky white cheese sauce I cannot wait to try. Yes please.

She provides several recipes for “meat crumbles”--burger, pepperoni, sausage and taco but they use quinoa which is super healthy but super expensive and is no longer in our budget and  TVP which we won’t buy. TVP may be cheap, it may be low fat but it is highly processed, defatted soy flour which uses hexane in the processing and we are just not keen on that. BUT, I have had great success using finely diced mushrooms and spices to make sausages so I imagine her imaginative spice combinations will be perfect with mushrooms instead of TVP.


On to the pizzas.


There are so many imaginative combinations I did not to know where to begin. I decided to start with Muffuletta Pizza.

Oh my stars and garters, it was delicious. Have you ever had a muffuletta sandwich? Mmmmmm, all those flavours and textures. I used an old favourite recipe from Dreena Burton’s Cookbook Eat, Drink and Be Vegan that we used to love to make in ciabata bread back when my tummy could still tolerate wheat. Those were the days. I have missed the tangy filling and now have a way to eat it again. Why did I think it could only be made into a Panini? 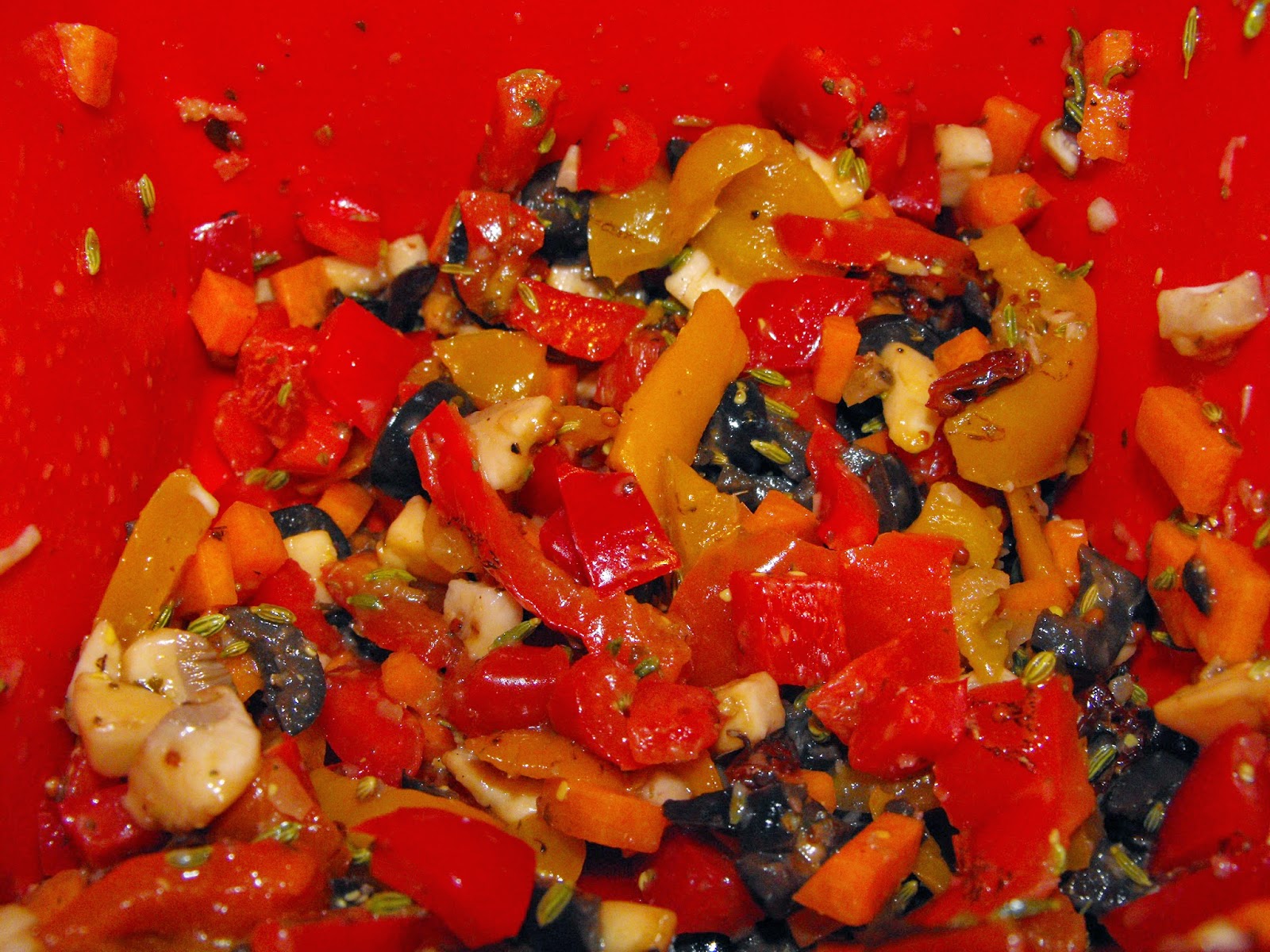 I used my regular gluten free crust, but the cookbook has several crust recipes (including a gluten free one and a spelt one) to try.

Here is the finished pizza. 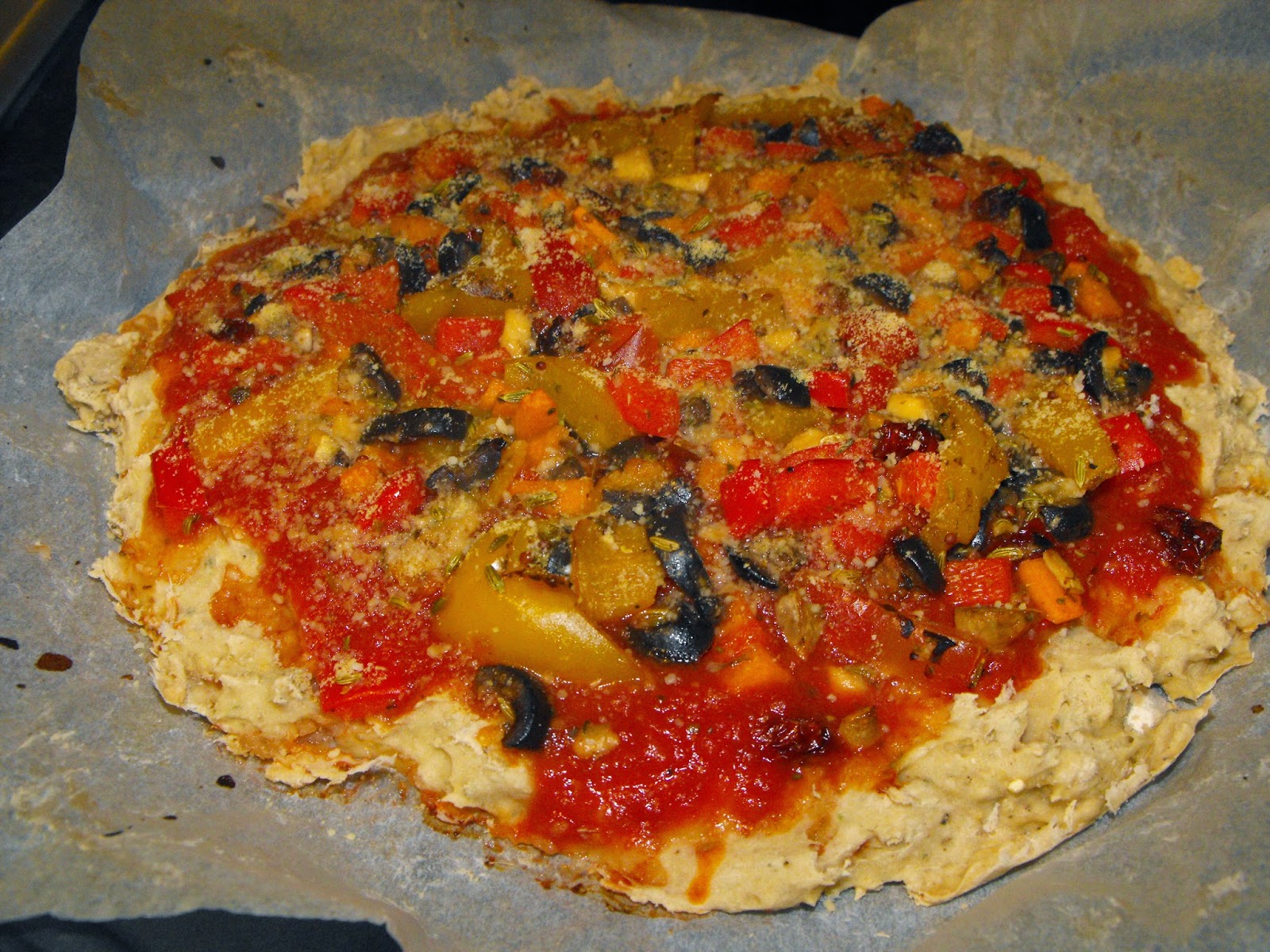 This photo does not nearly do the pizza justice so here is a closer look. 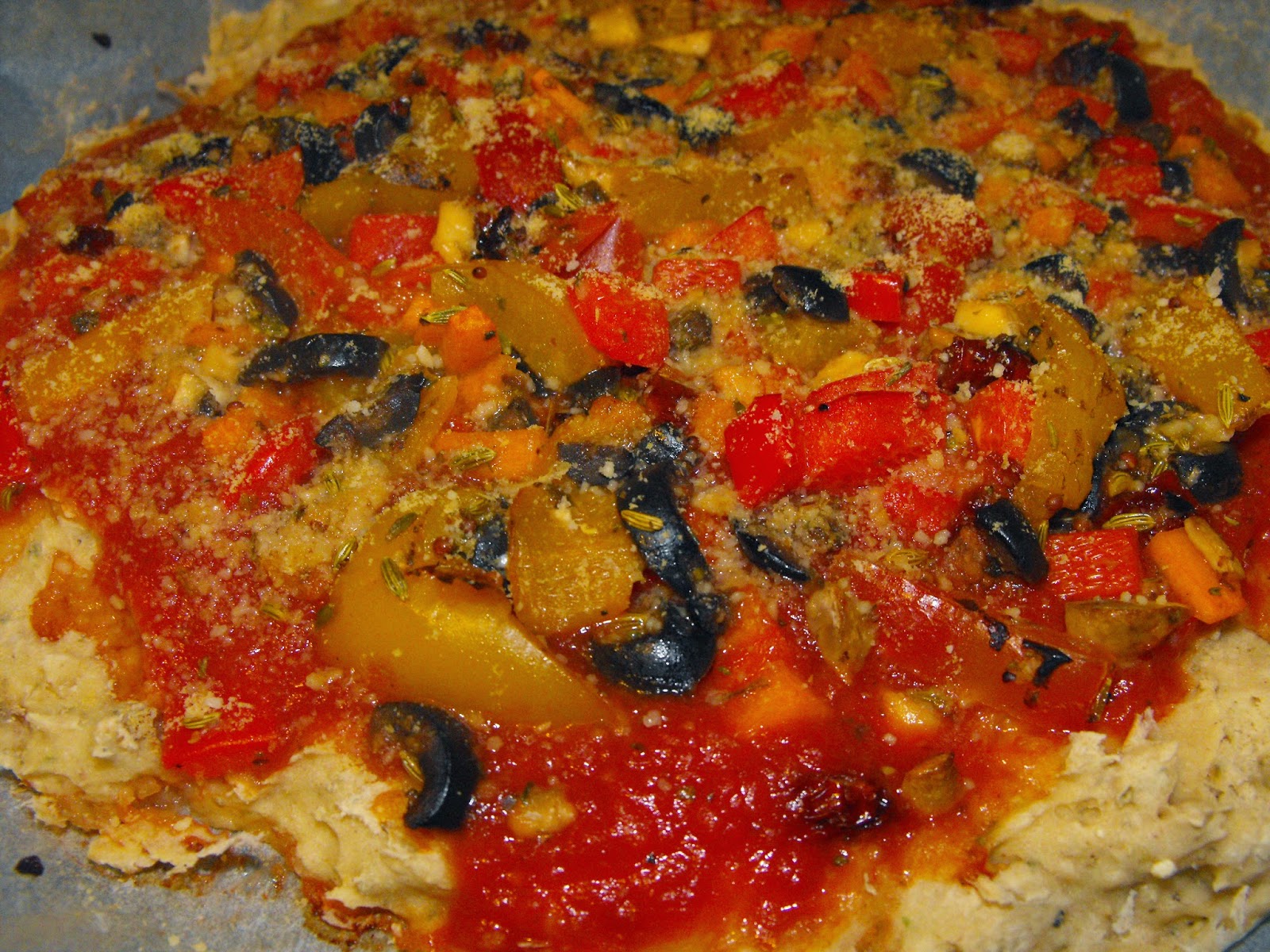 I used the cookbook recipe for the garlic pizza sauce and it was so yum. A simple, but flavourful sauce. I topped it with a dusting of home made vegan parmesan cheese and it was scrummy.

Plus we had the bonus of having about a cup full of the muffuletta topping leftover which made a very nice lunch on Sunday mixed with cooked rice. Bonus!

I am planning to try a new pizza each weekend so stay tuned for recipes. Ones I have my eye on for the future include:


Ÿ  Tomato, cucumber pizza (you bake the crust then spread on dill and parsley vegan sour cream and top with cuke and toms)

Plus did I mention there were recipes for dessert pizza????

I think this cookbook will give me endless ideas and get pizza back into our lives on a regular basis. It would be a great cookbook for anyone who likes pizza, vegan or not.

Get cookin’.
Posted by Heather Tisdale at 04:16 No comments: