I love to take a day trip. You get to go somewhere interesting then come home and sleep in your own bed. Well in this case, someone else’s bed--but you know what I mean.

We arrived at the Windmill on Saturday and since we had enough food with us we could have a meal without then having to go back out and hunt down a supermarket. On Sunday we pottered into the village of Edelsbourough which was quite small and scoped out the bus stop and found a well stocked newsagent/ post office where we bought a few items like crackers (wheat ones for Spiderman , rye ones for me), hummus, a cucumber and some frozen peas and oven chips. Then we toddled on home back to the windmill and chilled out.
Monday we took the bus into Dunstable which is where Jesus was born, according to Alice Tinker from the Vicar of Dibley. But the Vicar put her right explaining it was it a STABLE  rather in DunSTABLE. We popped into the library to use their computers to check email and then did a spot of shopping at the big supermarket for some specialty vegan stuff like soya yogurt and took the bus home and had a peaceful evening in preparing for the day trips.
Day trip one--Whipsnade Zoo
Whipsnade was the only place we couldn’t figure out how to get to by bus. We would have to call a taxi. It wasn’t until late Monday night, however, that we realized that the windmill didn’t have a phone. And if we were normal people who had a mobile phone this would not have been an issue, but we figured we would find a way to sort the issue in the morning. Early Tuesday we hiked into town and played “hunt the payphone.” I found one and Spiderman, armed with coins and a list of local taxi numbers entered the booth elated and came out a bit dejected. Apparently payphones don’t take coins anymore. You can use your debit card, but they will charge you £1.20 to do it. After much grumbling we decided to bite the bullet and just phone. I am so glad we did because 10 minutes later we were whisked off in a comfortable cab and dropped off at the zoo--just in time for opening. Then the extra special news was that because Spiderman is a regular volunteer at the London Zoo (2 Sundays a month) we got in FREE which saved us about £40. Hoorah!
Many vegans shun zoos as cruel to animals. I have certainly been to zoos like that in my lifetime--animals in small cages with a concrete floor and nothing to do but pace around and bite themselves out of boredom and frustration. But the London Zoo and Whipsnade are really different. They work hard to give animals as natural of a habitat as possible and work with conservation and breeding programmes to reintroduce endangered animals back into the wild. Plus Whipsnade is ENORMOUS--600 acres of land for animals to roam about. We were there for 5 hours and walked many miles. There is even a steam train you can catch but it costs £5 per person and since we got in free and brought pack lunches and were feeling strong and energetic (read that: cheap) we gave it a miss.
Best bits from the zoo:
Ring tailed lemurs are about as cutie-patootie as you can get. You could get really close to them as well. 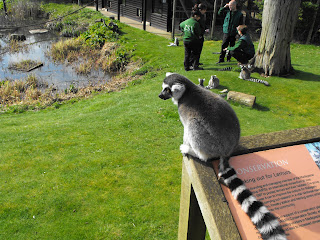 They also like to sit with chin up, arms and legs outstretched (with their little nuts just out there for God and everyone to see) to sunbathe because apparently their fur is thinner on their chests. 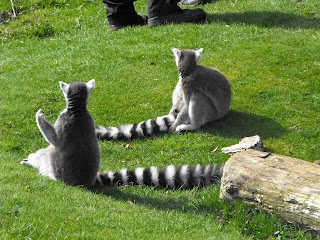 We saw a wolverine that looked nothing like Hugh Jackman. 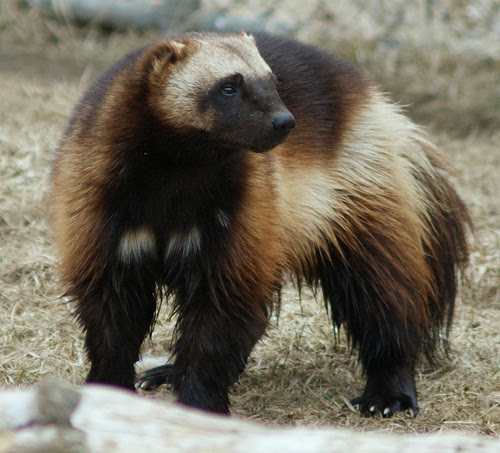 Here’s me comparing how wide I can stretch my mouth open compared to a hippo. And I thought I was a big mouth. 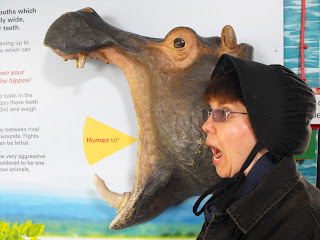 The hippo was bathing in a pool of poo filled water--they like to mark their territory with excrement--so no matter how many times they get clean water, the first thing they do is crap in it.  But it was fun to watch them submerge and then pop up to huff a bit of air and then go back down underwater with a plip…plip…plip.
Here’s a cheetah under Cheetah’s Rock. 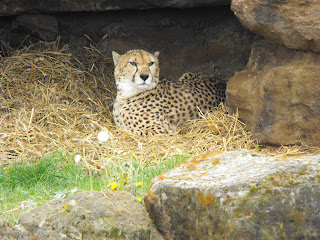 Look at the adorable mongooses--or is the plural of mongoose mongeese??? They were dwarf mongooses all cuddled up for a nap. 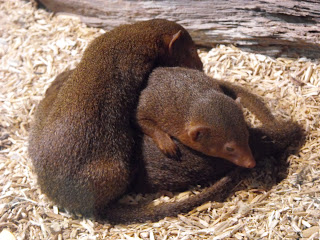 Here were the funniest, most active animals we saw--baby wild boars. Look at those soft stripy coats that help them to be camouflaged. They were rolling around pell mell, tumble bumble so much that we couldn’t help laughing. 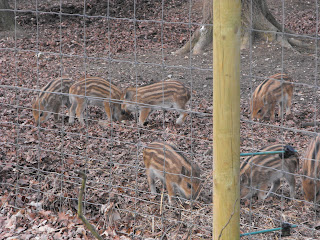 Later we came by and they were all tuckered out and snoozing  except one naughty looking one which Spiderman christened The Poky Little Peccary (peccary being a type of wild boar and The Poky Little Puppy being a favourite book from childhood.) 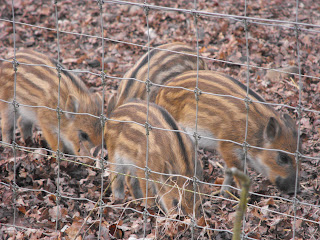 Here’s me again showing off what I would look like with antlers. Quite good, I think. You could hang your washing on them or Christmas lights. 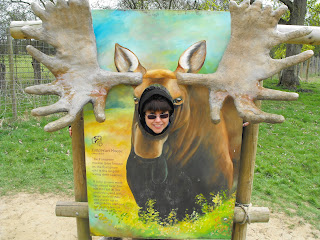 Lastly, here’s the penguins. It’s not a zoo trip without penguins. Spiderman and I have a wonderful shared memory of watching the penguins all line up in a queue for their fish at the London Zoo in 1990. 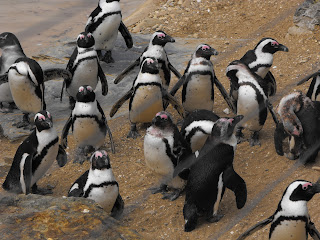 These were fed by throwing handfuls of fish into their swimming pond and then all the penguins diving in to catch them. Here’s one little guy just hoping for another fish. 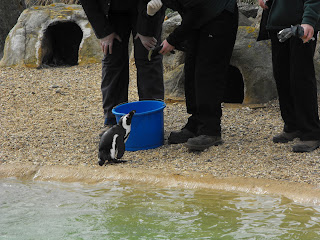 Then it was time to get on back home, but we had to figure out how to phone for a taxi. There was a very nice bloke working in the ticket booth who called for us, but unfortunately when the taxi arrived we had a bit of communication problems with our driver.

It was a lovely day, but for an allergic animal lover like me, it was sadly a two hankie day. I blew my nose all day due to hay fever from the grass and the animal fur. But it was worth it. Oh I almost forgot the magnificent white lion!!! This was carved out of chalk on the hillside by the zoo and we could see it from our windmill. During WWII it had to be covered up with camouflaged nets and plants so that German planes would not see it and bomb nearby Luton and Dunstable. 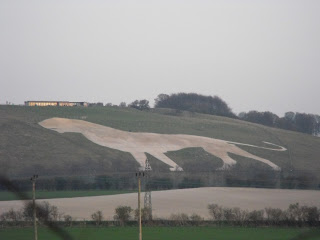 Stay tuned for Daytrippers. part the second tomorrow!
Posted by Heather Tisdale at 03:44