Music that Saved Me--Letter B, part 2

They were a British post punk, gothic new wave band that were largely undervalued in the States. I had a bootleg copy of their album F(r)iends (I thought it was very clever that the word friends could  be fiends if you left out the letter r) that I adored. Lead singer Trevor Tanner had this voice that was sometimes deep and moody-sinister with an occasional little high hiccup in pitch like a schoolboy whose voice is breaking. I introduced them to my friend Elizabeth J right as we were going off to our respective colleges--me Louisiana College and her LSU. She came home at Christmas with their next cassette Lindy's Party which was all the rage at LSU. I instantly fell in love with it. There are catchy songs (TV Man), sinister songs (Barrowlands), songs that seemed to be written about me as if they knew me (Lindy's Party). It was all good. Youtube doesn't have much by them so I will  choose Away  from F(r)iends to play first. It is a good use of his sexy -slightly sinister singing. I get shivers on the line Leave your door unlatched. Plus Trevor wears eyeliner so he looks even sexier.
Watch it here:
I was also in love with TV Man from Lindy's Party. The video is not that great (Trevor has no sexy eyeliner here), but the song lyrics really spoke to me.
1 2 3 hail TV
Watching Dirty Harry made a man of me.
You don't get any of his adolescent voice breaking in either song which is a shame. But they are still both brilliant.
Watch it here:
Black Flag
Or more specifically the spoken word poetry of Henry Rollins. This basically speaks for itself.
Rattus Norvegicus.
Listen to it here:
When I was LC and lived with the wonderful Anna C we used to recite this in unison to anyone who would listen. Hollywood Diary.
Listen to it here:
And tried again, with a renewed vigour and enthusiasm not seen by many.

Billy Bragg
He is like the British Bob Dylan of the 1980's to the present because he is still rocking the left wing political songs. His music blends elements of folk music,punk rock and protest songs with lyrics that mostly span political or romantic themes. His music is heavily centred on bringing about change and getting the younger generation involved in activist causes. It was 1988 and we were students at LC. Spiderman and I had just parted ways as he went back to his dorm for the evening and I stayed around in the TV room to watch a bit more late night talk show (Letterman, maybe?)  and Billy Bragg came on and I was so moved by the song that I had to go and phone Spiderman even though it was after 11pm. I couldn't even remember Billy Bragg's name--just the name of the song.
Listen to it here:
Best bits: You can be active with the activists or sleeping with the sleepers while you're waiting for the great leap forward. This line made me want to be one of  the activists not one of the sleepers.
Second best bit: If you've got a blacklist I want to be on it.

The Bad Shepherds
OK, I didn't discover this band until a few years ago (to be fair they only formed in 2008) Do you remember Vyvyan from the Young Ones? 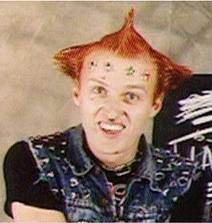 Well he grew up, learned to play the mandolin and formed a band. Basically they use Celtic folk instruments like the fiddle, the uilleann pipes, the mandolin and tin whistles to play punk songs from the 70's and 80's.  They are fantastic. We luckily saw them live a few years back in London. Here is their rendition of The Clash's London Calling live at HebCeltfest in 2010.
Favourite line: I love the way he sings London is drowning and I live by the river.
They cover so many great songs like Anarchy in the UK by the Sex Pistols to Ace of Spades by Moterhead all in a Celtic style.

There are so many other B bands I could mention but we'd be here all day. I won't play them, but I give a shout out to the Beastie Boys. I love you guys. Blondie-you're a gas. (soon found out, had a heart of glass)

What B bands do you love?
Posted by Heather Tisdale at 23:32