OK. There are only a few artists on my K list--and two of them have so many songs for different moods. There are so many fabulous songs or videos that is hard to narrow it down so this post will be all Kate Bush. 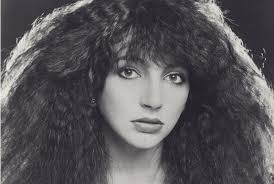 Kate Bush is amazing. She has this other-worldly ethereal voice. She is an incredibly talented songwriter and has been since she was a girl. A family friend David Gilmour (of Pink Floyd) heard her homemade demo and helped her get a more professional demo which helped her get a recording contract. She was also trained in interpretive dance and mime and combined with her unusual voice made her a hypnotic performer to watch and listen to.She also is gorgeous--really striking looking with wide heavily made up eyes and in the late 70's and 80's huge, wild, crimped hair. Plus perfect breasts.  Kate Bush is often thought of as a bit marmite--you either love her or hate her. Personally, I love her. I want to be her.

She was one of the first performers to wear a headset so she could have choreography and she had loads of costume changes. These days that is standard when you go see a concert--but it was all new when she did it.

I am a Kate Bush fan. My Australian friend Sharnee is a SUPERFAN. She has introduced me to so many different songs-especially demo versions of songs. I love the unplugged demo version as sometimes the words are slightly different and you can really hear the purity of Kate's voice.
My first pick is Wuthering Heights. Yes, a song about the Emily Bronte novel of the same name with some of that interpretive dance I mentioned.
Watch it here:
This is the white version. I prefer the choreography of this one, but there is another one where she wears red and dancing in a misty wood. Interesting fact: I can do this choreography.

My second pick is Babooshka. It is a story song about While I love the official video because she looks like this:

But I prefer this live performance where she wears this sexy red pantsuit with enormous flares. It really shows off her mime and choreography skills. Plus her face is so expressive especially at the end.
Watch it here:
My third pick is Army Dreamers. This tells a story about a young soldier killed as a BFPO (British Forces Posted Overseas) --again the perfect blend of big eyes and choreography plus it tells a tale.
My next pick is an environmental one. It is a companion piece to Air from Hair. It is called Breathing and is told from the point of view of an unborn child breathing in the nuclear fallout and pollution. Chips of plutonium, twinkling in every lung. I had this on my beloved Greenpeace cassette. It was part of my "worried about nuclear war" soundtrack that ran obsessively in my head. Kate is seen in a big plastic bubble--meant to be a womb. Even in utero, Kate looks amazing.
Watch it here:

I could list dozens of other songs, but my last choice is the Ran Tan Waltz. This was the B side to Babooshka. This is from a 1979 Christmas special. It tells the story of a man whose unfaithful wife goes out every night drinking and slutting while he stays home with the baby. It is the most amazing, gender bending choreography. Kate plays the man, and men play the wife and the baby. I wish i had someone to do this with as I would love to do the choreography if only someone would let me. Watch out for falling beards.
Watch it here:
There are so many I could choose, but these are the ones i go back to again and again. She is so beautiful. I love the angularity of her choreography. I love her big eyes and heavy eyeliner. I love her squeaky voice.

Stay tuned for Letter K--part 2--Kimya Dawson who is the anti-Kate, but just as beautiful and wonderful, but in a completely different way.
Posted by Heather Tisdale at 23:18