I am a closet metal-head. I don't listen to lots of metal, but there are certain bands like Metallica and Queensrÿche that i love and go back to time and time again when I want to do a bit of headbanging. There are many songs that I love by them and it had been hard to choose. My first choice is One from their album And Justice For All. It even won a grammy. This is based on the anti-war film Johnny Got His Gun.  The rapid drumming in this song brilliantly copies the sound of machine gun fire. This is old Metallica from 1988  back when the whole band had long heavy metal hair.
Watch it here:

My second choice is their excellent cover of Bob Seeger's Turn the Page. What really makes this go from great to freakin' amazing is the video. It is a film that tells a story. You know how I love me a story. You get James Hetfield still singing with his customary snarl and sneer but you get a video that is heartbreaking and shockingly realistic about a woman working in a very seedy business while trying to raise her daughter. Warning: There are adult situations and some blocked out nudity and suggestions of sex. The woman acting in the video--who does an incredible job of portraying her as sympathetic--is 80's porn star Ginger Lynn. Don't let any of this put you off. The video will tug at your heart and make you feel a huge concern to get out and do something about women (and the children who live with them) who are being exploited by men.
Watch it here:

My last choice is a hard rock  cover version of Whisky in the jar originally sung by Thin Lizzy. This is a brilliant alternate version of Gillgarra Mountain made famous by Peter, Paul and Mary.
Listen to it here:

This guy is great and fellow Doctor Who fan. he runs a comedy music club once a month in London called Distraction Club that we used to go to every month until we moved. He is funny and has written a great sci-fi book called Terra and often is the musical guest on the Radio 4 topical news programme The Now Show. His superpower is that you can shout out topical stuff that's been in the news and he can go away  for 15 minutes and write a credible song about the topic he has only just heard you shout. He is a genuinely nice bloke to boot. My first choice is a list song (and we've established I love a list song nearly as much as I love a story one) called I'm Proud of the BBC. Many of the folks featured in the video were regulars at Distraction Club. I can sing all the words.
Watch it here:

My second choice is a rock opera based on Eric Carle's The Very Hungry Caterpillar. This is a stop motion video made by yours truly.
Watch it here:

My next choice is just a funny satirical one called African baby.
Watch it here:

Me First and the Gimme Gimmes
These are the coolest punk cover band evah. Basically, they take songs that you don't expect and cover them with lots of lightning fast drums and guitar feedback. Some times they can sound a bit same-y, but when they get it right--they *really* get it right. My all-time favourite is a cover of  Dolly Parton's Jolene. I can play this on the ukulele just not at this speed.
Listen to it here: 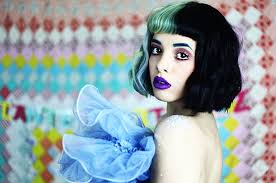 My last M pick is a new discover for me. Melanie Martinez has this fantastic voice and her debut album Cry Baby is a concept album. A concept album!!!!! it's like a whole album that tells a story!!!!!

Melanie is like some sort of pastel goth. I would love to own her full CD of Cry Baby as it comes with an illustrated story book to tell the story of the protagonist Cry Baby and her dysfunctional family. One of her songs called Pity Party samples Leslie Gore's It's my Party (and I'll cry if I want to) but my favourite song is probably Dollhouse.
Watch it here:
My other choice is one called Mrs Potato Head all about the pressure to look perfect, to be more plastic than real. Don't be dramatic, it's only some plastic. No one will love you if you're unattractive.
Listen to it here:

So that's my Letter M choices. A bit of a mixed bag from indie to metal to pop. I am a woman of eclectic tastes. Do you love a concept album? Or song and videos that tell a story?
Posted by Heather Tisdale at 11:46