Funny how some letters (B I am talking to you) have so many artists that I could hardly narrow it down and some letters like E, F and G have less. But these are no less significant choices.

Part Buddy Holly, part Bob Dylan--Elvis Costello with his enormous hoot-owl glasses and dorky manner and earnest voice often singing about injustice were a big part of the 80's. Less so in the States but huge in the UK. I recall listening to What's So Funny 'Bout Peace, Love and Understanding on the radio and recall clearly the video for Everyday I Write the Book which starred an unhappily married couple clearly meant to be Charles and Di. But those never inspired me to want to BUY  his music. Until Veronica. Spiderman and I both were completely entranced with the song and especially the video. It was co-written with Paul McCartney who also plays guitar on it and was about Costello's beloved grandmother's battle with Alzheimer's disease. If you have ever had a loved one who had dementia, you might need to get a hanky out.
Watch it here:
This song came out in 1989. By now Spiderman and I knew we were going to be together forever. We had already agreed that all property was communal now so we often took turns buying us cassette singles (remember those?) that we would share. He bought this one and I remember buying Cyndi Lauper's version of Roy Orbison's I Drove All Night for us.


I remember very clearly when i first saw the video for Sweet Dreams (Are Made of This.) I was bowled over by Annie Lennox--like the reversal of Adam Ant--she looked masculine with the short hair and men's suit but exuded femininity. But what was up with that cow?
Watch it here:

I also really loved the song Here Comes the Rain Again (which i can play on the ukulele!) because of the line that sounded like Here it comes again HOOHA! Because my friend Laura M and I used to say these weird things like Wa-ha and Hoo-ha 6:00. Also the word hoo-ha was code for an erection--hence why it was so funny in the song.
Watch it here:

Edited to add: My friend Danny reminded me of Edie Brickell and the new Bohemians in his comment below.. Crumbs! I should have included them! The terrible summer I worked for the most unhygienic Baskin Robbins in the world I played this tape over and over. Interesting trivia: Edie B is now married to Paul Simon.    Watch them here:

They had a few mainstream hits via MTV like One Thing Leads to Another and Saved by Zero but for me the songs that really jumped out at me were their anti-nuclear songs. they were VERY vocal about this, albeit in subtle ways. Both the mainstream songs that got lots of MTV rotation Stand or Fall and Red Skies were about this. Stand or Fall begins:

Crying parents tell their childrenIf you survive don't do as we didA son exclaims there'll be nothing to do toHer daughter says she'll be dead with you
While foreign affairs are screwing rotten,Line morale has hit rock bottom
Dying embers stand forgottenTalks of peace were being trodden
I have clear memories of seeing the video--there was this beautiful white horse that fell over in slow motion. Somehow seeing it always made me cry. It was 1982 and I recall watching this with Martha R my number one "frienamy" (friend + enemy. Urban dictionary defines it as: A person who you treat and whom treats you as a friend but if they are given a chance would "cut your throat" or get one over on you/put themselves first if it would benefit themselves, or they would gain an advantage over you.) and she laughed when i cried because I hated to see the horse die.
Watch it here:
I was so in love with this song as well as Red Skies and my thoughts were pricked with a real concern for nuclear war. I asked for this on cassette for Christmas. MTV made it easier than radio to learn who was the singer of a song you loved, but I still wasn't good at knowing the name of the album so I just wrote down "The Fixx. The one with Stand or Fall on it" and sent it to Texas for my grandmother to buy me. She would bring it to the music store and hand over the paper and they would do the rest. This is also how I got video games for my Atari (remember those?) It is also how my grandmother forgot the little bit of paper and went to mall and told the guy working there she wanted to by Donkey Dong for her granddaughter. TRUE STORY.

When I got the cassette Shuttered Room there was this amazing song called The Strain. It was all about Ronald Reagan. It begins with the words:

Back to back  The president cracks  There's no power left


In the old white shack
It's the same
New Washington
Red button
One push
And the whole world is gone
It's the same
I don't think that he should take the......strain.
This was scary stuff, but it made me feel empowered. Other people are noticing this is happening! Other people are worried too! I only recently found out (thank you Wikipedia) that this song was only released on the US version of Shuttered room. Not on the UK one (I guess the UK didn't need to to hear it) and I am so glad it was on the US release as it is my favourite song on the album.
Listen to it here:
We've Got a Fuzzbox and We're Gonna Use it! (often just shortened to Fuzzbox)
This all grrrl group from Birmingham England was a post punk alternative band who got their name after they bought a distortion pedal for their guitar. Their early work like Love is the Slug was all buzzy guitar feedback and attitude. I *adore* the low key, homemade quality of the video--especially the "we dressed ourselves" look and the brilliant "we made up our own choreography in our mate's bedroom" dance sequence. This was back before you had to have a super polished video that cost £10,000 to make. This is just some riot grrrls having fun. Later they looked better with professional hair and make up and better equipment and had a hit with Pink Sunshine, but for me-- nothing beats Love is the Slug.
Watch it here:
Did you notice the red haired one has what appear to be spider earrings?  They also do a *brilliant* version Valley Girl voiced version of Spirit in the Sky. I love that the album says a "top-ho spiffing rendition" of the song. They crack me up. This was the B-side to Love is the Slug.
Listen to it here:
Gin Blossoms
In 1992 (the year we were married) this song called Hey Jealousy came out and I recall hearing it on the radio (and later seeing the fairly unremarkable video on MTV) and being in love. It is a story song. A sad story song about a downward spiral. Apparently a true story song written by the guitarist and was largely biographical. He was fired from the band shortly after this for not being able to get hold of his addiction. The line you can trust me not to think  was originally written as you can trust me not to drink. Which clearly they couldn't.
Watch it here:
Goldie Lookin Chain 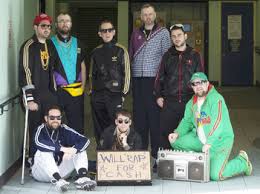 OK, these guys are my secret guilty pleasure. Spiderman has said "Not secret enough". ha ha They are a new addition to the music I love--introduced to us by our friends Cathy and Pete. I mentioned the Beastie Boys at letter B (but did not write about them because B was so freaking long already) but this band fills the same gap for me. They are a Welsh comedic rap group from Newport, Wales. Their always  funny, sometimes controversial, often explicit songs satirise hip hop, today's consumer society and chav (white trash) culture. They sing songs like Your mother has a penis and Your Missus is a Nutter. More controversial ones include Guns Don't Kill People Rappers Do.  But my favourite ones are the ones where they satirise  Welsh culture or sing a tribute to their favourite local shop. They also do a hilarious satire of the posh "I've got a pony" set who shop at Waitrose(the no riff-raff supermarket--very upscale)  where they talk in fake upperclass accents and have the theme to Are You Being Served in the background. Sometimes it is just Rhys and Eggsy. Sometimes there are more of them. All local, All just being themselves and having fun. Here is my favourite one--just Rhys and Eggsy called The Fresh Prince of Cwmbran about a standard Welsh town with adequate facilities. (to the tune of Will Smith's Fresh Prince of Bel Air)
Watch it here:
I almost chose an equally good one called You're Not from Newport but it only has Rhys and i am partial to Eggsy. Another favourite is where they are singing about their favourite corner shop the Baneswell Express. It has a few pops toward chav culture with lines like Extra strength lager to drink on the streets.
But I think i have to choose At the Drive Thru which is as good of an argument for veganism as I have ever heard. With lines like
Eating Burgers in My Car till my belly gets swollen
Forty pounds of beef undigested in my colon
and
All you need is some bread and some saturated fat
Lips, aresholes, noses and ears. Bits of different cow that have been dead for years

In the "making-of" video they said they were all quite sick from eating all the fast food. It is very sweary but incredibly funny and realistic and clever.
Watch it here:
So that's my E, F and G. Do you have secret guilty pleasure music that you love?

Posted by Heather Tisdale at 03:19