Keys to the Kingdom

If you read this blog then you know that we love the graphic novel Locke and Key by Joe Hill.

The story is compelling and the artwork by Gabriel Rodriguez is amazing.
I won't gush on and on and on about it here when I have done it before. http://spidergrrlvstheworld.blogspot.co.uk/2012/09/boxing-without-black-eyes.html

But last year, Spiderman entered a photo competition with Skelton Key (the artisans who make all the replica keys featured in Locke and Key) and he won and we got a $50 gift voucher to spend.

So after a year of waiting for them to make the keys we wanted I give you the newest addition to our collection--key to the crown of shadows and the anywhere key. 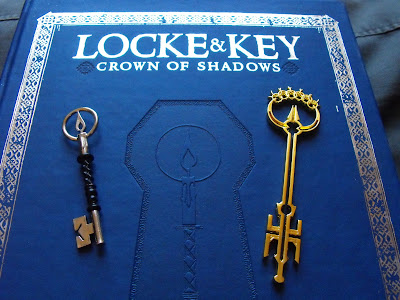 The key fits in the crown of shadows and with it you can control the living shadows.
Seriously, the shadows all do your bidding if you wear the crown with the key.

The second key is the anywhere key and it does what it say on the tin. You can stick the key into any door and as long as you can visualise where you want to go, when you open the door...you are there.

But still! we have keys! And we only had to pay postage as the cost of the keys was covered by the prize money.  Now we own eight keys:

the shadow key lets you control the shadows

the head key lets you open up your head (or someone else's) and take things out or put things in.

the moon key lets you open a door from this reality to the next--it once helped young Ian Locke who was dying of a brain tumour to fly up to the moon in a hot air balloon, open the moon and join his ancestors

Now if they will only make the timeshift key.

Posted by Heather Tisdale at 14:35