And now for something completely different...

We were at a folk concert recently where the talented Meadows family was performing (you can learn more about them here: http://www.themeadowsband.co.uk/ ) and my friend Rosie Mai and I got very excited about a particular song that they sang called The Two Sisters as we know another version of this murder ballad. At the interval, I jokingly said that I would like to research this ballad in all its various forms and write about it on the blog and she thought that would be very interesting to read so here we are. She was correct. It has been fascinating to research this ballad. So, I thought, why not write about it? Perhaps others will find this interesting, too.

To quote our friend Chris Priestley: Are you crouching ominously? Then let’s begin.

What is a murder ballad?
According to Wikipedia:
Murder ballads are a subgenre of the traditional ballad form dealing with crime. Their lyrics form a narrative describing the events of a murder, often including the lead-up and/or aftermath. Like a regular ballad, they are often passed down orally.

The ballad I would like to discuss for the next several Mondays is a ballad entitled The Twa Sisters. This is one of the most well-known ballads. You find versions of it in Denmark, Iceland, Norway, Sweden as well as Scotland, Ireland, England, and other European countries. American versions can be found in the Appalachians as well.

The basic plot is there are two sisters who both love the same man. The eldest is often described as "dark" and the younger as "fair." Out of jealousy, the eldest pushes the youngest in the water where she drowns which allows the elder sister to marry the sweetheart. Many versions feature a supernatural element whereby the bones of the dead girl are turned into a musical instrument which sings the story of her murder, often in a way that brings punishment to the elder sister. The song also features a refrain in every stanza that ties the song together.

The earliest available text of this song was entitled The Miller and the King’s Daughter by James Smith and was published in 1656 in Musarum Deliciae (The Muses Recreation.)  Sir Walter Scott collected a version for his 1802 edition of The Minstrelsy which was compiled from several versions including one taken down “from the memory of an old woman.” Scott made a few alterations to the refrain changing it from “Edinburgh, Edinburgh” to “Binnorie o Binnorie” which is the version I first came across in a reader that belonged to my seventh-grade English teacher. 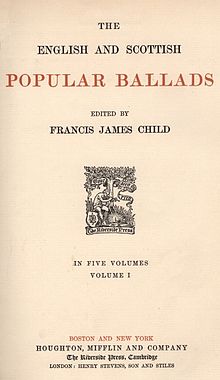 In the late nineteenth century, a Harvard professor named Francis James Child collected a canon of English language ballads that number 1-305 which he published as The English and Scottish Popular Ballads. He actually collected more than 305, but any variations on the same ballad were categorised under the same Child number. So, the ballad we will be looking at is classified as Child Ballad 10. He collected 21 different versions of this ballad with titles such as The Twa Sisters, The Bonny Milldams of Binnore, Minnore, The Cruel Sister, O the Wind and the Rain and the Bonny Bows of London. Each ballad collected was accompanied by extensive notes about where and how the song was collected as well as facts about the variation.

While Child collected the texts of 305 variations of ballads in his five-volume work, he did not include the tunes. American academic Bertrand Bronson  took up where Child left off with his Traditional Tunes of the Child Ballads. Four large volumes were published between 1959 and 1972. Bronson brought together all the available tunes for each of Child’s 305 collected ballads with their texts and annotations. Many of the variations that I have researched owe their tune to this book although there have been a few adaptations borrowing refrains from other Child ballads, which we will explore further down the line.

Over the next few weeks I plan to show you several versions of Child ballad 10 and compare them to the original source that I first came across in 1981 which was a condensed and slightly anglicised version of Walter Scott’s version of Binnorie. Each week, I will tell you what I have learned about the variation, show you a chart highlighting similar themes in the ballad compared to other variations and play you a video of someone singing that particular version.

So, stay tuned. See you next Monday!
Posted by Heather Tisdale at 23:58