I have been having a major crafty renaissance at the moment. Just crafting my little heart out. Lots of new ideas just pop into my brain and I. Must. Make. Them. Now.

However, this craft has been brewing and stewing for months.

Months, I tell you.

I wanted to decorate some bottles with the potions labels from the Harry Potter franchise. I am no stranger to bottle decorating. 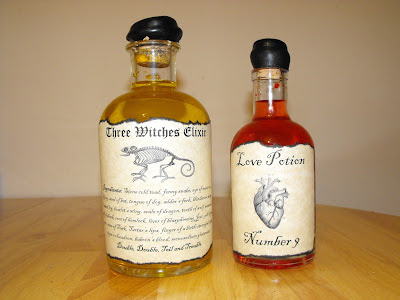 But when we were visiting with our Louisiana friends The Petersons  who were here on holiday over the summer, I got this idea. We met them at the Doctor Who Experience in Cardiff and they had already done the Harry Potter studio tour experience which Spiderman and I did a few years back. We had a big ole geeky time with them and I got to thinking about this project. The thing that impressed me most about the Harry Potter tour was the potions classroom with all those fantastically labelled bottled.

I thought: I could do that.

My previous attempts were printed on parchment paper and had utilised the torn edges idea to make it look old. I also inked the edges with a brown sharpie to give it definition. Then I just used watered down PVA glue (Elmer's glue to my American peeps) to glue the labels on. Easy peasy.

This time I wanted to try something different.

But first I had to
ponder
practice
collect

I did a lot of pondering as to what potions I wanted to make. I spent hours looking on google to see what others had done. I found some that were free printables which were awesome and (if I'm honest) probably better than the ones i could do, but I wanted it to be a self made project, not a copied project.

I have *just* learned how to use borders and text boxes and so i wanted to practice my computer skills and make the labels.

Throughout this whole pondering and practising time, I was collecting  interesting bottles. I was asking people to raid their recycling for me. When I felt like I had enough bottles that seemed to fit my labels then I was ready to begin.

I also printed them on parchment paper as it helps right away to give them an antiqued look. 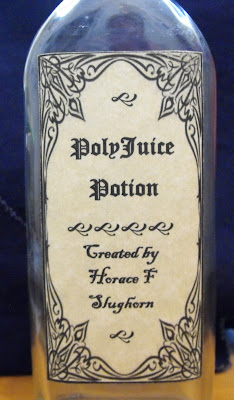 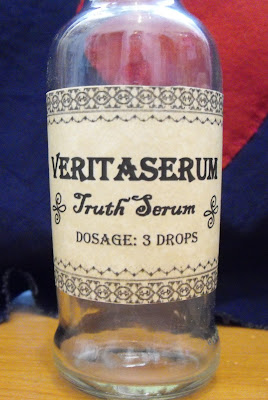 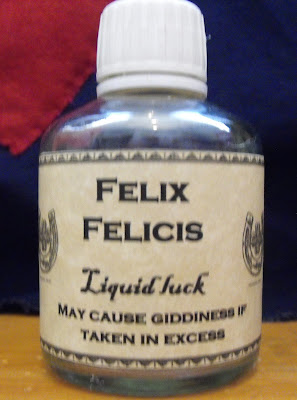 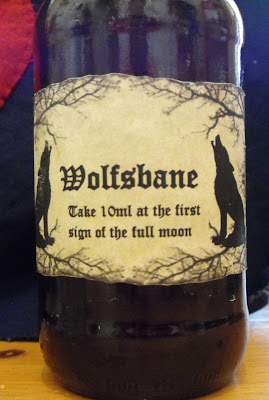 I normally prefer clear bottles so you can fill them with coloured water (see below) but I really liked that brown bottle and Wolfsbane seemed like a good choice to be in a brown bottle. 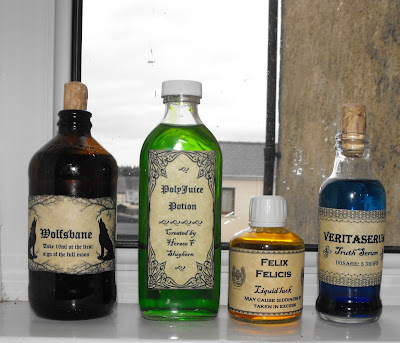 The corks are fake (I made those, too)

It was a bit of "needs must" as two really good shaped bottles had had bottle caps and were lidless.  I tried to buy corks.

I tried to ask friends who drank alcohol to save me their corks. 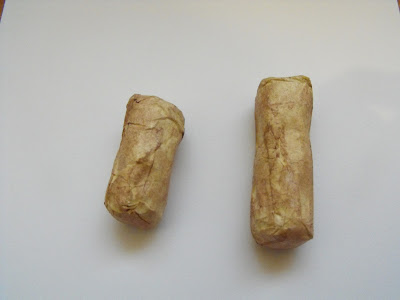 So i rolled up some aluminium foil into a cork shape and then used  torn strips of  parchment paper that I had previously thrown in the bin after cutting out the labels.  I just used the leftover PVA glue (Top Tip: store your watered down glue in a jar with a lid and it will last for months and so when the urge to do some crafting comes over you, you can make it at a moment's notice) and papier-mached the foil til it was all covered with parchment paper. It still didn't look *quite* right so i used my secret cheap-ass theatre technique to stain the corks.

Shhhh.....don't tell anyone. This is our little crafty secret.

Seriously, this stuff makes a great antique stain. Rub some on with a paper towel and then buff it off. It gets into cracks and crevices and makes something look old and I got a tin for £1. On the down side, it stinks a bit. That's from the petroleum. On the upside, it's vegan. It uses carnauba wax not beeswax.

So now they reside in the window catching light (and undoubtedly catching dust) but I love them and am proud of them and I still have two more labels (one for Skele-Gro and one for Floo Powder) that i am just waiting for the right bottles to appear.

I've got my glue saved in a jar, so I can be ready at a moment's notice.

What are you making?
Posted by Heather Tisdale at 10:13