Hello and welcome to Part nine of Murder Ballad Monday.

Like last week, this version features the bones being turned into a fiddle. This version is one that “crossed the pond” and you often find Americans singing a variant of it. The particular version I am sharing today is set in Ireland (the lyrics say the two sisters are from County Clare), although it seems to have an American flair to it. This version is entitled Wind and Rain and is sung by the folk duet of Paul and Kim Caudell. 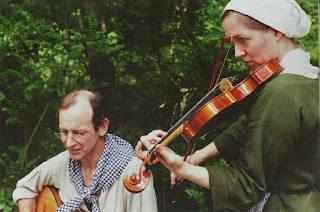 When I looked at the frequency of instrument occurrence in Child Ballad 10, I discovered that there are 21 variations of Child ballad 10 (lettered A to U) and only six mention a fiddle, the rest mention her being turned into a harp.  Child ballads  E, D, F, I,  R and  O all mention an instrument maker using her body parts to make a fiddle that sings of its own murder. Child ballad I and E do not mention the actual creation of the fiddle, but merely that a fiddler took her hair. Child ballad I says a fiddler took her yellow hair “and the first song the fiddle played “it was my sister threw me in.” Child Ballad E is incomplete and simply ends with a fiddler taking her hair, and so we never discover if the instrument sings by itself.

Looking into versions of The Wind and the Rain, I have discovered there are several different variations of this song. Next week I will explore another version of this song.

I chose this version because I like the simplicity of it and the close harmony. However completely ignore the fact that it says under the video that it is a SCOTTISH ballad as it is set in County Clare which is in IRELAND. I have included the lyrics below if you would like to follow along.  Listen to it here:

So, here is how it breaks down compared to other versions:

Name of ballad: The Wind and the Rain
Performed by: Paul and Kim Caudell
Refrain:
Oh, the wind and rain
Oh, the dreadful wind and rain
Number of sisters: two
Where did they live: County Clare
Appearance described as: One was dark and the other was fair
Sweetheart: the Miller's son
Excuse to go to the water: none given
Body of water: river
“Sometimes she sank, sometimes she swam”: no
Miller and child: mentioned as a sweetheart, not as the one who found her body
Mistaken for: n/a
Described in death: "dead on the water like a golden swan"
Who finds her on the bank: fiddler
Instrument she becomes: fiddle
Body parts used: long finger bones, long yellow hair, breastbone
Would her song “melt a heart of stone”: no
Do the strings sing individually: no
What does the instrument sing:

Here are the lyrics so you can follow along if you wish. I have eliminated the refrain so it won’t be so long.
There were two sisters of county Clare,
Oh, the wind and rain
One was dark and the other was fair,
Oh, the dreadful wind and rain
And they both had a love of the miller’s son,
But he was fond of the fairer one.

So she pushed her into the river to drown
and watched her as she floated down.

And she floated till she came to the miller’s pond
dead on the water like a golden swan.

As she came to rest on the riverside
her bones were washed by the rolling tide.

And along the road came a fiddler fair
and saw her bones just a lying there.

So, that’s it for version nine of the Twa Sisters. Stay tuned next Monday for version ten.
Posted by Heather Tisdale at 03:33