Hello and welcome to part fifteen of Murder Ballad Monday.

For the last few weeks we have looked at versions of The Twa Sisters where the supernatural element has been removed. In previous weeks, the miller rescued the sister, then stole her jewellery, and pushed her back in again.

This version harks back to the first one Murder Ballad Monday that I wrote about. It is entitled Minore and uses a chorus similar to the one collected by Sir Walter Scott in 1802. He changed Edinburgh, Edinburgh in the refrain to Binnore, Binnore. In this version Minore stands in for Binnore.

The refrain for this song is:
Minore, oh Minore
By the bonny dam sides of Minore 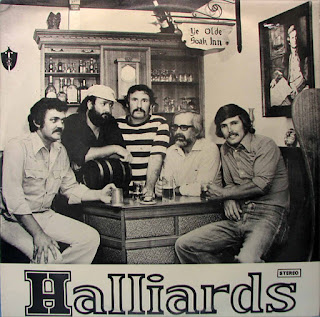 This version is by a band called Halliards. I stumbled upon them on YouTube looking for versions of this song. I confess I had not heard of them at all, and struggled to find any information about the band at all. Finally, I stumbled onto australianfolk.blogspot.co.uk which had this to say about it:

I know very little about this band but they brought out this LP in Australia in the late 1960s. The band members are listed as Derek Moule, Brian Hall, Paul Langford, Stan Armstrong and Eric Brooks with some help from Rob McCarthy, Bernie Kellow and John McLaughlin. They were an Australian group but it is obvious that some of them are ex-pats from the United Kingdom and Ireland. (Not to be confused with the folk band "Halliard")
This is a great LP and they do great justice to the songs on this LP both vocally and instrumentally. In fact, it is one of my favourite albums. The songs are mainly a mix of tracks from the British Isles with one Australian traditional.

Somehow in the other versions he seemed to be a bit of a “Jack the lad” trying it on with both sisters, (perhaps the jolliness of the music makes me think this) but somehow in this one, it seems different to me. Perhaps there was pressure to marry the eldest, but his heart went to the youngest. Like in the book/film Like Water For Chocolate where he marries the eldest to be close to the youngest who is not allowed to marry (she must stay home and care for the elderly mother.)

This version is also different because the sweetheart in question is the miller’s son and it is he who finds the body of his beloved.

Halliards version of this traditional ballad is really lovely, just a harp in the background with the singing over it. Listen to it here:

Name of ballad: Minore
Performed by:  Halliards
Refrain:
Minore, oh Minore
By the bonny dam sides of Minore
Number of sisters: two
Where did they live: in a bower
Appearance described as: the youngest was the fairest and the eldest was plain
Sweetheart:  the miller’s son
Excuse to go to the water:  “to see our father’s ships come in”
Body of water: the dam
Does it contain the line “Sometimes she sank, sometimes she swam”: “she swam up and she swam down”
Miller and child: the miller and his son
Mistaken for: n/a
Described in death: either a swan or a milk white maid
Who finds her on the bank: n/a
Instrument she becomes: n/a
Body parts used: n/a
Would her song “melt a heart of stone”: n/a
Do the strings sing individually: n/a
What does the instrument sing: n/a
Is the sister punished: no

Here are the lyrics if you would like to follow along. I have eliminated the refrain so that it won’t be so long.
There were two sisters in one  bower
Minore, oh Minore
And there came a young lad for to be their wooer
By the bonny dam sides of Minore

He bought the eldest a broach and a ring
But he loved the young one above anything.

Sister, sister come to the dam
To see our father’s ship come in.

They went to the dam and stood on a stone
And the eldest pushed the young one in.

She swam up, and she swam down
And she swam to where her sister stood.

Sister, sister give me your hand
You can have the miller lad and all of his land.
He’s the bonny miller lad of Minore.

It wasn’t for that that I pushed you in
For you are the fairest and I am plain.

Father, father come to the dam
There’s either a swan or a milk-white maid
Who lies drowning in the dams of Minore.

There’s none of them there knew her face so fair
But the miller lad knew the yellow hair
Of his own bonny lass of Minore.

So, that’s it for version fifteen of The Twa Sisters. Stay tuned next Monday for version sixteen.