What We Ate Wednesday--Roasted Cajun Corn and Sweet Potato salad

Hello lovelies! Because I am a bit of an OCD organised freak, I have a recipe index where every recipe we've ever eaten and really liked is catalogued under subheadings by main ingredients as well as the cookbook/recipe binder where it can be found. It sounds like a lot of work (but it was truly a labour of love) and it makes things so much easier.

Case in point: this meal. We've been having lots of white potatoes recently as they have been on sale, but I wanted to change it up and have some sweet potatoes. So I looked in my recipe index under the words sweet potatoes to see what would be good to make this week as I was planning my menu for the next 7 days. Yes, of course I make a menu! Did I not already mention that I was an OCD organised freak??  A menu is great idea --especially if you are on a budget like us--it prevents overspending because there is a list to follow when you shop. Yes, of course there is a list! In fact, there are multiple lists for multiple shops because I have another book that tells me where the best prices are in town, What part of OCD organised freak do you not understand???

Anyway...a 1kg bag of sweet potatoes containing 5-6 sweet potatoes costs me 95p at Tesco and I can make that go for three to four separate meals or I can make it go for a big soup that feeds us for two days and one additional meal. So this is where I need to decide which recipes I want to use, so I know the best way to divide up my taters.

I decided on the three meal approach this week by looking at recipes and seeing what we already had in the pantry that could be used for the meal. This recipe was an easy choice because it is really tasty, we haven't had it in a while so it will be a treat, and we already had most of the ingredients on hand. We always have frozen corn and I had recently cooked up a 500g bag of black eyed peas and portioned them off in my freezer into servings. I've always got spices and condiments like oil in stock, so I really just had to buy the vegetables and the pumpkin seeds.

This recipe is based on what we ate whilst on holiday in Chichester  many years ago. I noted down all the ingredients and figured out how to make it at home. 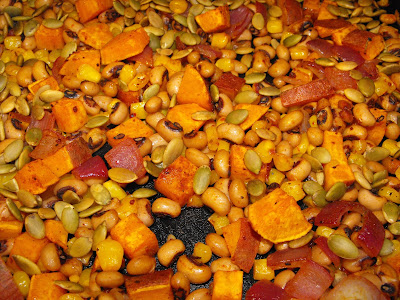 
1. Stir well to combine oil with the beans and vegetables then sprinkle on the spices.
2. You want to serve this over a grain so start it when you need it. I used easy cook brown rice that cooks in 25 minutes so I started it right before I put the roasting pan in the oven.
3. Roast for 15 minutes. Remove from the oven and stir and add  1/4 cup (40g) pumpkin seeds and roast for another 15 minutes.
3.Remove from the oven and drizzle over the marinade of lemon juice and liquid sweetener.
4. Serve over a grain like rice or couscous or quinoa.

It is tangy and spicy and little bit sweet and 100% delicious.
Posted by Heather Tisdale at 01:43