Hello and welcome to Murder Ballad Monday. Last week we looked at Vicky Lawrence's version of The Night the Lights Went Out In Georgia and this week we are looking at Reba McEntire's 1991 version from her album For My Broken Heart. 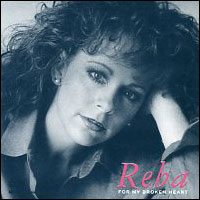 I wrote last week about my feelings about the original recording of this song. What made it work for me as a child (and as an adult revisiting it) is the air of mystery.

What happened to the brother?  Was he lynched? Was it a show trial?

Why couldn't the sister get there in time? They hung my brother before I could say.....Where was she? Why didn't she come forward sooner? What prevented her? (This is why I always pictured it as rough justice. That they hanged him on the spot. Otherwise, why could she not come forward?)

Where did she hide the body? But that's one body that'll never be found....

I don't know, but I pondered these things over and over as a child. I also sat in front of the mirror and lip-synced the song trying to capture that crazed southern hard-ass murderer look on the last line.

That probably says a lot about me as a child.

Why this song was so meaningful to me was the sense of mystery. I didn't want to KNOW the answers. I wanted to IMAGINE all the possibilities.

This is where, to me, the Reba McEntire version fails. She wants to fill in the missing bits. The video spells out everything in painstaking detail.

And just like an episode of Poirot, it reiterates the findings over and over just in case it was not clear the first time or you are not clever enough to understand.  Like this:

Poirot: She stabbed her huzband when zey were all watching ze eclipse. Clever, non?
Inspector Japp: So you're saying that Lady Wishforit waited until the eclipse and then stabbed her husband?
Poirot: Oui, Monsier. And zat iz how Lady Wishforit was  able to murder her huzband when no one was watching.
Inspector Japp: Because we were all watching the eclipse. Astounding!

I personally feel like it makes the song weaker rather than stronger, but I know I am in the minority on this. I also prefer the tough- as- nails- cold- murderer feeling that gave me chills rather than this poor pitiful Pearl in bad age makeup that Reba does.

That probably says a lot about me now.

But why don't you decide? Watch the video and see what you think. I have included the lyrics below for reference.

The Georgia patrol was making their rounds
So he fired a shot just to flag em down
A big bellied sheriff grabbed his gun and said
"Why'd you do it?"

Well, they hung my brother before I could say
The tracks he saw while on his way
To Andy's house and back that night were mine

That's all for this week. Stay tuned next week for a bit more Southern Gothic with Ode to Billy Joe.

Posted by Heather Tisdale at 07:49