Murder Ballad Monday--Whiskey in the Jar (Thin Lizzy and Metallica)

Hello and welcome to Murder Ballad Monday. Last week we looked at a dashing Highwayman and his sweetheart Bess from the poem by Alfred Noyes put to music by Loreena McKennitt. This week, we continue with the theme of the Highwayman, but from a different source.

Whiskey in the Jar is a traditional Irish song about a Highwayman who is betrayed by his wife or lover. What a contrast to last week's ballad where the lover gave her life to try to save her sweetheart!  It is set in the southern mountains of Ireland as many versions mention the counties of Cork and Kerry, specifically. The song originally comes from a song entitled The Highwayman and the Captain, but was adapted into the version we know today in 1967 by the Irish folk band The Beasley Brothers and later became the signature song for The Dubliners.

I first heard a version of this by Peter, Paul and Mary entitled Gilgarra Mountain. In their version, the Highwayman robs Colonel Farrell and takes the money home to his sweetheart Jenny who betrays him to Farrell's men and puts him at the disadvantage when they arrive by stealing his rapier and filling the charges of his gun with water.  He is then taken before a judge but escapes through some fancy fist work (the songs says They didn't me fists, so I knocked the jailer down and bid a farewell to this tight-fisted town.) There is no murder in this version. Nor are there murders in versions entitled Kilgary Mountain.

The version I want to highlight was the one recorded by the band Thin Lizzy off their Vagabonds of the Western World album in 1973.  This version was slightly different to the ones that follow the fisticuffs mode of Gilgarra Mountain and the like. This version was a murder ballad. 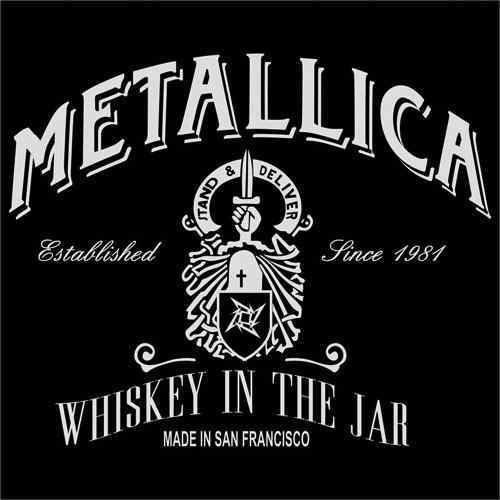 In 1998, hard rockers Metallica did a cover version of Thin Lizzy's Whiskey in the Jar on their album Garage Inc. I had never heard the original by Thin Lizzy, but this version made me investigate the band. While I appreciate the Thin Lizzy version, I adore the Metallica one. Lead singer James Hetfield's trademark sneer goes well with the arrogance of the Highwayman.

This one doesn't just have the protagonist knock the jailer down, it has him shooting Colonel Farrell with both barrels of his gun after he was betrayed by his sweetheart Molly. The song ends with him lamenting all the things he misses as he rots in prison--especially sleeping with Molly (even though she betrayed him.)

And if you'd like to compare it to Thin Lizzy's version, then you can watch it here:


As I was goin' over
The Cork and Kerry Mountains
I saw Captain Farrell
And his money, he was countin'
I first produced my pistol
And then produced my rapier
I said, "Stand and deliver or the devil he may take ya"

Being drunk and weary
I went to Molly's chamber
Takin' Molly with me
But I never knew the danger
For about six or maybe seven,
Yeah, in walked Captain Farrell
I jumped up, fired my pistols
And I shot him with both barrels

Now some men like a fishin'
But some men like the fowlin'
Some men like to hear,
To hear the cannonball roarin'
Me, I like sleepin',
'Specially in my Molly's chamber
But here I am in prison,
Here I am with a ball and chain, yeah

Stay tuned next week for a tale based on a Western.
Posted by Heather Tisdale at 23:27