What We Ate Wednesday--Black Eyed Peas with Curried Yogurt

Hello lovelies! This is one of the first vegan meals I learned to cook. The recipe came from a vegetarian cookbook I bought in a charity shop in 2004, soon after we emigrated to the UK. The rest of the cookbook was just so-so, but this recipe has stood the test of time. I photocopied it from the cookbook and returned it to the charity shop from whence it came. I have no idea what the cookbook was or who wrote it--it might have been Linda McCartney. Not sure. But whoever wrote it, I salute you!

This is a great recipe for using up the dreaded green pepper that comes from your three pack of peppers. The earthy flavour of Black Eyes Peas (or Black Eyed Beans as they are known in the UK, but they will always be peas to me. Shut up...just shut up, shut up...) seem to really go well with the green pepper so we eat them together often. In fact, I recently bought a kilogram bag of dried black eyed peas that were on sale and cooked them all up, so you will likely see many black eye pea recipes over the next few weeks as I have a freezer full of the spotted buggers to use up.

This recipe is also great for using up plain soy yogurt. The one I buy is 500g and I might use it in a cake as a fat replacer, then use a dollop on top of something spicy, but what to do with the rest of it? this recipe is the answer. 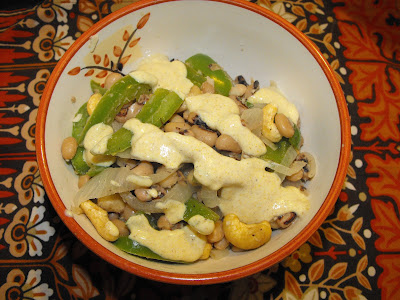 Black Eyed Peas with Curried Yogurt
1 tin black eyed peas, drained and rinsed (or 1.5 cups if you cook them yourself)
1 white onion, cut into rainbows (thin strips)
1 green pepper, cut into thin strips
juice of half a lemon (2 TB)
1/3 cup unsalted cashew nuts
salt and pepper to taste (but lots of pepper really makes this good)

1. If you are making rice, start it first. We use an easy cook brown rice that takes 25 minutes, so i get this going and then start the rest.
2. Start by cooking your onion in a bit of oil or a splash of water until softened. Add your black eyed peas and green pepper and cook, stirring occasionally, until the rice is nearly done.
3. Meanwhile, make the sauce by mixing everything together in a container. Taste it. if it seems bitter, then add a squidge of liquid sweetener, stir and taste again until the balance of tart, savoury and sweet is achieved. The original recipe called for 2 TB fresh pineapple juice, but I'm like Who has that just laying around their kitchen??? So I use lemon juice and bit of sweetener.
4. When the rice is done, remove from the heat and add the lemon juice and cashew nuts to the black eyed pea mixture. Add salt and pepper to taste.
5. Drizzle the curried yogurt artistically over your food and take a photo, then ladle more on so that it covers your food.

This is quick and tasty as well as thrifty as it uses up stuff in your fridge like the dreaded green pepper.

Go and make it today!
Posted by Heather Tisdale at 01:10