What We Ate Wednesday--UB40 Chickpeas, and Kale over Pasta

Hello lovelies! When I get a new cookbook the first thing I do is read all the recipes and look for ones that seem like we would like them. I then put a question mark by every one I intend to try and then once I have tried it, I put either a tick or a cross (that's a check or an X to my American peeps) by the recipe, depending on what we thought of it.

I recently was rereading a cookbook I got a few years ago and noticed there were quite a few with question marks, so I am making an effort to try things we haven't eaten. This particular cookbook is called Let Them Eat Vegan by Dreena Burton.  I have many of Dreena's cookbooks and they are all a sure bet for good recipes.

I was thumbing through and came across a recipe for Tempeh Tickle. The marinade was said to "tickle your taste buds" which sounded good as I like marinades with a complex flavour profile. These days, we don't buy tempeh. We don't avoid soy like some of my friends (hi Ernie!) but we are on a stricter budget and tempeh just doesn't make the cut. A packet of tempeh costs around 3-4 quid. A tin of chickpeas is 33p.

I know which one I am choosing.

Spiderman says I am genetically incapable of following a recipe exactly as it is without a little tweak here and there. He's right. I duck and dive and substitute where necessary. I look in my fridge to see what needs to be used up and I look in my pantry to see what we have and I go from there. This is how I keep us eating delicious, healthy, nutritious meals for £30 a week.

We had chickpeas, we had kale and we had gluten free pasta. I could use the marinade and build a meal around that.

You may notice that we eat A LOT of kale. Well, there's a reason. It is nutrient dense and inexpensive. I can get a bag that feeds us for 2 meals between 80p and £1.

On to the recipe. So how did I get from Tempeh Tickle to UB40? Simple. The recipe calls for red, red wine. Geddit? Now, some of my friends I know you don't drink. Don't freak out. You can use regular wine (the alcohol cooks off I swear) or you can buy alcohol free cooking wine. Either way, red wine gives it a really rich and complex flavour.

I decided to cook it like I cook my tangy roasted chickpeas and vegetables and then saute some kale and throw it over some pasta. I use 1.5 cups pasta for two people. 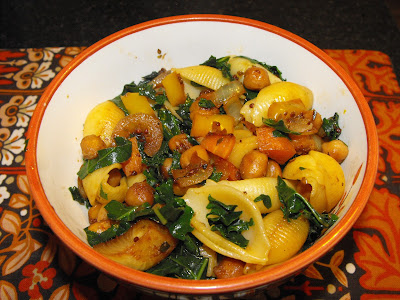 UB40 Chickpeas and Kale over Pasta
Preheat your oven to 200C/400F.
In your biggest roasting pan add the following:
1 tin of drained and rinsed chickpeas
1 onion, diced
half a bell pepper, diced
one small carrot (or half a large one) diced small

Then in another small bowl, mix up the marinade then pour over the chickpea and veg mixture and stir well (with your hands if you need to) to get it all coated.

Roast in the oven for 15 minutes, then give it a good stir and roast another 15 minutes. As the UB40 mixture is doing its thing in the oven, cook your pasta according to directions and get the kale (100g, 4-5 cups) washed, destemmed and torn into bite size pieces.

When the UB40 is nearly done, saute your kale in a large pot on medium high with a splash of water until the kale cooks down and turns bright green (about 5 minutes) then add a hefty splash tamari or soy sauce.

Mix in the pasta and the UB40 mix in with the kale and dig in.

Posted by Heather Tisdale at 05:37