Hello and welcome to the very last Murder Ballad Monday. I started this journey 56 weeks ago, not really knowing where it would lead. I began by exploring different variations of the traditional ballad The Twa Sisters (I found over 30 different versions, some of which were non-English versions) and then I went on to other favourite songs about murder and death. I have really exhausted every song that I loved, discovered some new ones along the way, and have had a wonderful time researching and writing up my findings and sharing it with everyone. I just feel like I am ready to move on to something else. Yes, there are hundreds more murder ballads out there and I could just write about them, but this has been a personal journey and a labour of love. I wanted to only write about songs that mattered to me and it would feel disingenuous of me to continue with just any old songs. But fear not, loyal reader. I have plans for a series of posts where I explore the darker versions of fairy tales. If you only know the Disney versions, be prepared to be scandalised. 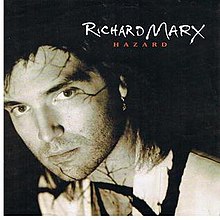 So, what song is my last murder ballad of the series? The 1992 song Hazard by Richard Marx. It’s one I remember because of the video and the mystery behind it. I spent many hours watching VH-1 and hoping it would reappear, so I could add more clues into my log book. Yes, I had a log book where I wrote down clues from the video and tried to analyse the lyrics. I loved it because it was like watching a crime drama, but with singing. A musical version of Law and Order.

I was not the only one who was obsessed with the videos (yes—there were at least 2 different videos, the second one containing more clues in the form of dialogue, but VH-1 showed it showed less and I only saw it once or twice. There was also a rumoured third version that I never saw) because there are still several fan sites where people write their own theory of the crime and analyse it to the extreme. These are my people. If you want to read their theories go HERE and HERE.

I really like it because I could never decide. I wanted to say he was innocent and just mistrusted because he was an outsider—I certainly knew that that felt like. But then the video shows us disturbing footage of his mother (who bears a great resemblance to the murdered girl) having an affair and the anger he felt as a child when he witnessed it. There is also footage of a burning house—the house with his mother and her lover. Was on an accident? Or did he know exactly what he was doing? Mary is murdered after he sees her with a lover in a car. Is it history repeating itself or is it just bad luck?

There are other clues. The song lyrics contradict the video. Wikipedia says:
The video makes it apparent that he flees the scene where he sees Mary with the unidentified person, leaving his scarf behind, which is later used as an attempt to place him at the scene. Yet the lyrics state that he 'left her by the river [...] left her safe and sound', which contradicts the video. Additionally, how would he know that he left her there, if he had not been with her, because she 'went walking alone and never came home'?

And then there’s the creepy Sheriff. He is seen following Mary in his car and taking secret photographs of her with the Richard Marx character. Is he some sort of pervert? Is he worried about Mary’s safety with Marx’s character as he has a history of bumping off promiscuous women? Did he do it and frame Marx?

What about the lover? He is seen getting down with Mary in a car (how classy) as both the Sheriff and Richard Marx look on. Marx runs away, leaving his scarf behind. The scarf that will later be used to strangle her. Mary is seen to run away and chase after Marx. Was the lover jealous? Did he do it and frame Marx or was Marx jealous and commit the crime of passion?

What about suicide? The second video has dialogue that declares that suicide was a theory due to lack of evidence. Did Mary feel guilty for betraying Marx’s character by boning that dude in the car and then kill herself? But then how did she strangle herself with the white scarf? Or did she? We only have the Sheriff’s word that that is how she actually died.

Marx even made appearances on VH-1 when the two versions of the video aired urging the viewer to watch and .and see if you can figure out who killed Mary."

We will never know. So, as my parting gift to you, loyal reader, I leave you with the mystery. Who do YOU think killed her?

Here are the videos. Lyrics below in case you need to write them in your log book for later analysis.

I think about my life gone by
And how it's done me wrong
There's no escape for me this time
All of my rescues are gone, long gone

Thanks to everyone who has stood by me for the last 56 weeks and read all the murder ballads I had to share. I hope you will continue my journey as I explore the history of fairy tales, the original darker sources which have been sanitised by Disney.