What We Ate Wednesday--German Chocolate Cake

Hello lovelies! It was my birthday this week and I decided to make my favourite sort of chocolate cake as a little pressie to myself.

Those of you who are regular readers of this blog know the story about the Spiderman and I met and fell in love after I made a tit of myself by accidentally eating an entire cake. If you don't know the story then you can read it HERE

So, anyway. I wanted to make a proper  German Chocolate Cake for my birthday. not just a chocolate cake with some coconut and pecans sprinkled over the frosting, but the sort with the OMG gooey icing.

I knew I would want to do it my way--vegan and gluten free with less fat and sugar than a traditional German Chocolate Cake, but still amazingly good.

Before I share the recipes--let me just go on a little educational detour and tell you the history of the German Chocolate Cake.

Fact of the Day
So, German Chocolate Cake is from Germany, right?  Nope. Not at all. I always assumed it was, but Wikipedia has set me straight.

According to Wiki:
In  1852  American baker Samuel German developed a type of dark baking chocolate for the Baker's Chocolate Company. The brand name of the product, Baker's German's Sweet Chocolate, was named in honor of him.

On June 3, 1957, a recipe for "German's Chocolate Cake" appeared as the "Recipe of the Day" in The Dallas Morning News.  It was created by Mrs. George Clay, a homemaker from 3831 Academy Drive, Dallas, Texas. This recipe used the baking chocolate introduced 105 years prior and became quite popular. General Foods, which owned the Baker's brand at the time, took notice and distributed the cake recipe to other newspapers in the country. Sales of Baker's Chocolate are said to have increased by as much as 73% and the cake would become a national staple. The possessive form (German's) was dropped in subsequent publications, forming the "German Chocolate Cake" identity and giving the false impression of a German origin.

Back to the recipe. Once my head was full of interesting cake-based trivia, I set about looking for a recipe for the amazing coconut pecan frosting. I figured I could veganise it. I was planning to use my fail-safe amazing vegan/GF chocolate cake recipe, so all I needed was to figure out how to make the topping.

Then I had a look at the actual recipe in the Betty Crocker Cookbook and I nearly fell off my chair. The frosting recipe called for three egg yolks, half a cup butter, one cup sugar and one cup evaporated milk. Yikes. And that didn't even count the four eggs, one cup of butter, two cups of sugar and one cup of buttermilk in the cake itself.  No wonder it sent me reeling on a  roller coaster of sugar and fat highs and lows whenever i ate a slice (or two...or three...or the whole cake.)

I *knew* I could make it better. Rich and decadent, but way less fat and sugar.  It is not healthy by any means--but it is considerably healthier. 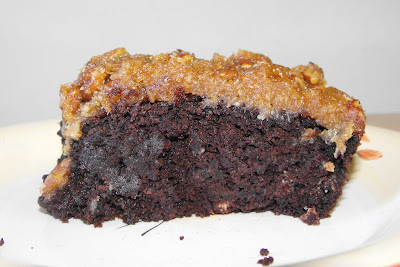 German Chocolate Cake with Coconut Pecan Frosting
My chocolate cake recipe is adapted from THIS  recipe from Moosewood. I cut the sugar in half by using Tate and Lyle demerara sugar with stevia and cut the fat by subbing half the fat with soya yogurt. *if you make it with regular flour  not GF, then just don't add the xanthan gum--that's just for us sensitive types.* And don't be freaked out by the vinegar. This is the secret to making fluffy, tender vegan/GF cakes that rise up high. You can't taste it, I swear.

Instructions
1.      Preheat the oven to 190C
2.      Grease an 8 inch square pan..
3.      In a bowl, measure and mix the oil (and yogurt if using) sugar and coffee. Beat with a fork.
4.      Sift the flour, cocoa, baking soda, salt (custard power if using) directly into the bowl with the liquid ingredients. Stir until combined. Then spoon into the greased pan.
5.      In the greased pan, add the vinegar and stir quickly. Pale swirls will occur where the vinegar and baking soda react. Stir just until the vinegar is even distributed throughout the batter.

I adapted THIS recipe on Veg Web for a coconut pecan frosting that was like the ones I remembered so fondly, but wouldn't put me in a diabetic coma.

Coconut Pecan Frosting
I cut the recipe in half as I wanted to only frost the top of my 8 inch square cake. This is plenty of sweet gooey frosting. If you don't have brown sugar, you can cheat by adding a teaspoon of molasses to your mixture

Holy Moly! It was *just* like I remembered German's Chocolate Cake (see what I did there?) to be.

It was plenty sweet--but not enough to rot my teeth. it was plenty rich--but without ruining my diet.

The whole cake (frosting included) has only half a cup added fat and less than a cup of sugar. There is fat in the coconut and pecans as well, but being wholefoods they also have fibre and vitamins and minerals, not just empty calories. So, I guess the with the coconut and pecans there is more fat than half a cup--but it is still considerably less than a slice of that Betty Crocker monstrosity.

I am really pleased with this cake and as June 11th is national German Chocolate Cake day--I suspect we'll be seeing this cake again come summer since that's our wedding anniversary time.

Posted by Heather Tisdale at 23:10