The Case of the Suspiciously Bristly Moustache

Hello friends. One of the things that I love about Spiderman is that we can still stay up all night discussing random topics. We’ve done this for years—even before we were married—we would often stay up deep in conversation in EV Commons until the sun rose.

We once stayed up all night having a marathon of film versions of Dickens’ A Christmas Carol and keeping a log about how textually accurate (or inaccurate) they were. We kept big complicated diagrams and charts about certain passages of prose and how they were handled in each film. The winner—the film deemed to be the most textually accurate was The Muppet’s Christmas Carol.

So, recently we have been watching a marathon of all the Inspector Morse episodes we own (which is nearly all of them). This has led us to discuss how Morse in the show played so beautifully by actor John Thaw as a hard-drinking, opera-loving, crossword addict grouch is much sanitised from the books. Author Colin Dexter definitely softened the character who was more patronising to women and obsessed with sex. He was less likeable in the books. And there were other changes as well. His sidekick Detective Lewis is Welsh in the books (a fact neither of us remembered) because we are used to seeing him as Geordie (from Newcastle) actor Kevin Whately. Sixth Doctor incarnation Colin Baker played him on stage, much more like the books, and would have been very good at it if you recall his arsehole version of the Doctor. This really wasn’t Colin Baker’s fault…an actor can only work with what he was given. But he would have made a wonderful textually accurate Morse.

This led to discussions about other long running detective shows where the actor becomes the *true* version and you forget what he or she was like in the books.

Looking at versions of Sherlock Holmes we both agree that Basil Rathbone is good, but Jeremy Brett is THE Holmes. He did it the longest and it nearly drove him mad. He *became* Holmes, which is not a very good thing to do considering who Holmes is—a drug addict and most certainly bipolar. Brett himself famously battled mental illness—many of the same demons that plagued Holmes. I have also often thought Holmes was on the Autistic Spectrum. And while we *adore* the new Sherlock with Benedict Cumberbatch, they are more a subversion of the genre filled with a wink and a nod to the original source like cases such as the Speckled Blond (the Speckled Band) and the Geek Interpreter (the Greek Interpreter). They are magnificent in themselves, but are not textually accurate.

We got onto Miss Marple (again…Joan Hickson is THE definitive Marple) who may not look as the books describe. I have a real memory of the words “bird like” in one of the books which would suit fantastic-actress-but-all-wrong-for-the-part of Miss Marple Geraldine MacEwan, but not Joan Hickson as she was stockier. Also, the character mellowed over time in the books—she was a right nosy parky and bitchy gossip in the first book The Murder at the Vicarage. We always just think of her as beloved spinster.

Miss Marple inevitably led us onto Hercule Poirot. Again…many have played him—some good, some bad—but to us the definitive was David Suchet, who played him for a quarter of a century. We loved Albert Finney in the 1974 Murder on the Orient Express. He seemed to capture Poirot’s fastidiousness and vanity. I *hated* Peter Ustinov even though I adored Death on the Nile (1978) and Evil Under the Sun (1982). Ustinov was all wrong. He was just playing himself with a Frenchy accent and his OWN MOUSTACHE.

I am not the only one who thinks this. According to Wikipedia:

Christie's daughter Rosalind Hicks observed Ustinov during a rehearsal and said, "That's not Poirot! He isn't at all like that!" Ustinov overheard and remarked "He is now!"

This led us into several days discussion about Poirot’s Moustache which is where all this has been leading.
Why we loved Suchet’s performance so much was his attention to detail about Poirot’s appearance and his moustache. In case you don’t know Poirot was a Belgian refugee who fled to the UK during WWI. In his first appearance in The Mysterious Affair at Styles his moustache was described as stiff and military owing to the fact that he was refugee and didn’t have the money for haircare.

Here is where book and video versions start to merge or separate. Spiderman and I both recall clearly the books talked about Poirot having little curling tongs to curl the ends of his moustache. We remember a moustache kit with waxes and oils. We remember his vanity and sleeping with a moustache guard to keep it in place.
This is why I hated Peter Ustinov—it was not Poirot’s moustache—it was just Usinov’s. The moustache was like a separate character to me. It had a life of its own, like a prissy little hairy friend of Poirot perched on his upper lip. Ustinov’s has no style. It was also salt and pepper which annoyed me as I recall Poirot’s vanity where he dyed his moustache and his hair.
This is where I loved David Suchet. His moustache was magnificent, prim, prissy, curled, and overly dark. It seemed exactly as Agatha Christie had written it.
When the advert for the new Murder on the Orient Express came out we fell about laughing. What the hell did Kenneth Branagh have on his face??? Where did that giant walrus of a moustache come from? Didn’t he read the book for Frith’s sake??

This is where WE were wrong. We had spent so long looking at David Suchet that we had somehow made his moustache the definitive one.

The more Poirot became an established private detective, the bigger his trademark moustache became. By the early 1930s his famous facial hair had evolved from being stiff and military into a magnificent, luxurious asset which gained much comment from himself, narrators and other characters within each story. Throughout Christie’s stories, his moustache was described as ‘gigantic’, ‘immense’ and ‘amazing’, pointing to the importance of this physical asset. By 1934 Poirot himself was described as ‘a little man with enormous moustaches’ in Murder on the Orient Express. By this point and beyond it was clearly his greatest physical attribute, being described as ‘an immense moustache’ in The Labours of Hercules in 1947.

So, why does Kenneth Branagh’s moustache feel so WRONG to us?

It is just ludicrously large.  Branagh defends it in article after article calling on the text to back him up, but I just don’t buy it.

It may be an enormous moustache, but it is doesn’t seem well cared for or groomed with wax and oils and it certainly not dyed. The salt and pepper thing he’s got going on does not work for me—Poirot was too vain for that. In Appointment with Death it is described as suspiciously black. And what the hell is that little goatee/soul patch thing???? I might could live with the ridiculous moustache if it weren’t for the unexplained very un-Poirot like tuft of hair.

What are your views? Have you seen the new Murder on the Orient Express? Did you want to punch Kenneth Branagh in face throughout the film?

Who are your favourite versions of literary detectives?

I leave you with this Tom Gauld cartoon which says it better than I ever could. 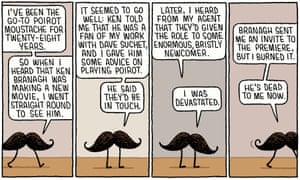 Posted by Heather Tisdale at 07:41