Hello lovelies! We recently had our Vegan Christmas party at a local club called the Parrot. There was food. So much food. There was dancing. I danced to everything from Chubby Checker's The Twist to Push It by Salt n Pepa. It was a proper knees up. But at the end of the night when we were cleaning up there was quite a lot of unopened salad-y things left, because who eats salad at a party? Nope. We were eating vegan sausage rolls and cheeze 'n onion  pasties and shoving as many mince pies in our greedy gobs as we could.

Who ate all the pies? Me. It was me. And forty of my dearest friends. But mostly me.

The next day when we had all sobered up and gotten back to healthy eating I discovered I had taken home a bag with three punnets of cherry tomatoes and a couple of bags of salad. The lettuce was no problem as I could feed that to the Bronte Snails, but what to do with those cherry tomatoes?

Well, the first thing I did was ROASTED TOMATOES WITH WHITE BEAN ALFREDO SAUCE.

But what to do with the other two packets?

I started to google the words "roasted tomatoes" and I came across this recipe for HONEY ROASTED CHERRY TOMATOES from Epicurious who based their recipe on the one from Hugh Fearnley-Whittingstall's cookbook River Cottage Veg.

I thought...hmmmm...I could adapt that. I used golden syrup for the sticky instead of honey (but you could use agave or maple syrup if you have them on hand) and I added a bit of tamari/soy sauce to amp up the flavour. And extra garlic. Because vampires.

I also added broccoli and chickpeas to roast along with the tomatoes to make it a meal and served it over brown rice. 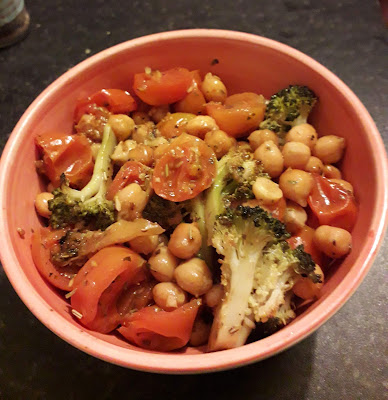 In a large roasting tin add:

In a small jar make the marinade. It was so cold in the house that my golden syrup (which is really thick) refused to emulsify so i had to gently heat it on my stove to mix it all up. Your house may not be as cold as mine.

Drizzle the marinade over everything and stir to make sure it is all well coated. Make sure all tomatoes are cut side up and generously season with flaked sea salt and pepper. Then generously sprinkle on some dried rosemary and mixed herbs (or Italian herbs). The rule is, when you think you have added enough herbs then shake on more. You want lots of herbs.

Roast in the oven for 25-30  minutes. serve over brown rice. 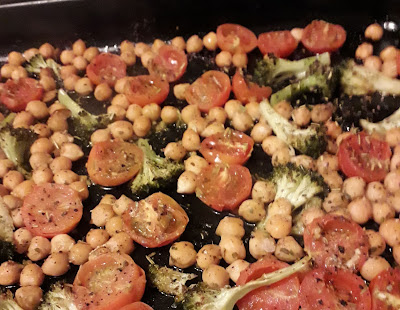 This was really good. Herb-y. Garlicky. Sweet. Sticky. Savoury. My only complaint would be that I wished the broccoli was a bit crisper, but it browned up nicely and had good flavour. The tomatoes collapsed and went all juicy, so i really have nothing to complain about.

Now I just need to figure out what to do with the final punnet of cherry tomatoes......

Posted by Heather Tisdale at 05:27