This week we look at a silent film made in 1907. It was directed by Albert Capellani who was a French film director and screenwriter of the silent era. He had a theatrical background and often cast stage actor colleagues for his films. Capellani's films cover many genres, including melodramas, fairy tales, costume dramas with historical and biblical themes, and literary adaptations including adaptations of Beauty and the Beast as well as The Hunchback of Notre Dame and  Les Misérables. 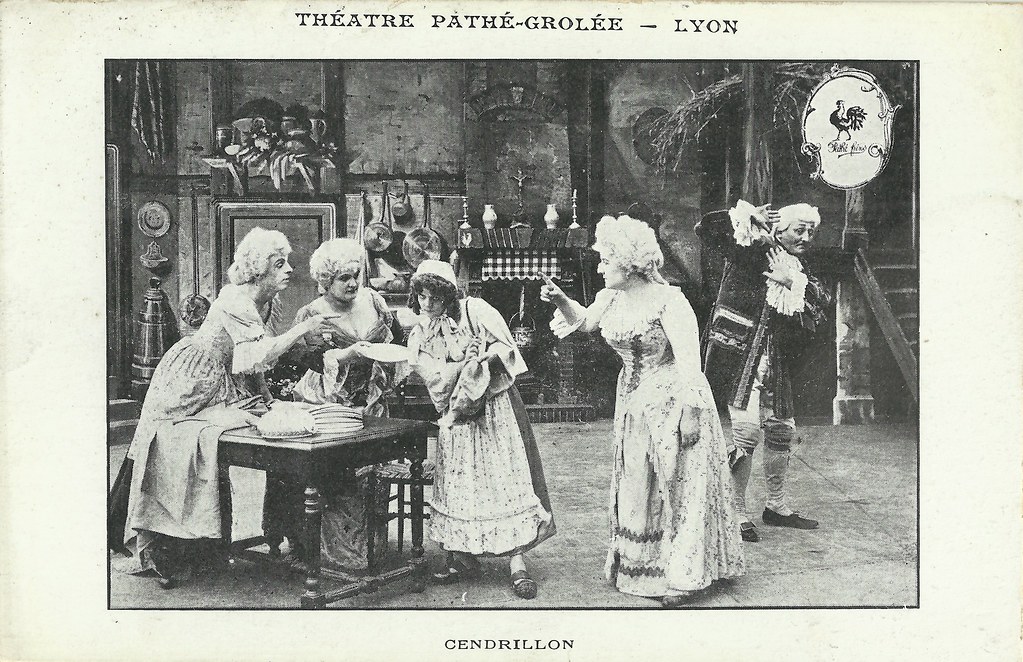 It stars Louise Lagrange in the title role. Lagrange was a French actress of the silent screen  who starred opposite Valentino. I personally do not think much of her silent acting skills, but perhaps I am not wise to the subtleties of the silent film era.

This film is 14 minutes long and there are some surprisingly good effects in it, but a few “what the heck is going on” moments. Perhaps that was indicative of all silent films, I don’t know. Perhaps if you had never seen talkies you would be able to follow the plots better.

This film has useful title cards which set the scene. We begin with The Invitation to the Ball. We see our heroine weeping as she is chastised by her stepmother and stepsisters. She does a lot of weeping, which is really just putting her face in her hands and shaking her head to give you the impression of sobbing, but as every good crybaby knows—sobs come from your shoulders. A man enters the room and comforts her and wipe her tears. I thought because he touched her on the face to wipe away her fake tears was meant to be her father since he was so overly familiar, but I wasn't sure. I think he is. He opens the door and lets in a clumsy man from the palace who brings news of the ball. This becomes clear after some wild gesticulating and a jig to indicate there will be dancing. The clumsy man from the palace seems to fall down in every room they go in. I presume this is some sort of comic relief (because watching people fall down is funny.)

As you would expect, she isn’t allowed to go. She lays her head on the table and pretends to cry when--and I really have no idea what this is even after watching it five times—some sort of goblin appears out of a box on the kitchen wall. My husband said “Is it meant to be a rat? Or a cat?” But it definitely has a jester’s cap on and tries to repeatedly taunt or frighten her throughout the film. I genuinely have no idea, so if you do please leave me a comment. Then her fairy godmother appears and seems to chase away the goblin acrobat. She summons a hoard of dancing girls (why are there always dancing girls in togas in silent films?) who appear to weaving a giant fishing net (I kid you not) which turns into a fancy gown for Cinderella. I suppose if you had them weave a fancy gown with actual thread it wouldn’t show up on film.

They go into the lounge and the goblin does a somersault and becomes a man in period clothes in a very good special effect. He then throws two chair cushions on the floor which become footman. I presume he is meant to be the driver of the coach, but then he spends a few minutes teaching our heroine how to dance and bow and other things she might need to know when going to a royal ball. A minute ago he was some sort of hobgoblin and now he teaches deportment.

There is a big orange warning card to remind her to be home by midnight followed by  a fantastic special effect of a pumpkin becoming a coach. Then she is whisked off to the ball which turns out to be an outdoor affair. It is some sort of garden party where is quite hard to tell who is who (these white period wigs make it very hard to tell people apart.) While other people dance, she walks for ages in a circle  with someone that I thought must be the prince but then after her long walk she is introduced to someone (without a white period wig) and they dance so HE must be the prince. Then cleverly, the musical accompaniment begins to chime twelve times and she runs away leaving her shoe.

The escape was the strangest I had ever seen. She is running down a road and is suddenly attacked by that inexplicable goblin (for the love of God, please help me figure out what he is!) and then is seen to be exaggeratedly limping with a whole search party twenty steps behind her. They catch up to her and the prince seems to ask a “Have you seen a lovely maiden pass this way?” sort of question which she violently shakes her head to say “No.” He doesn’t recognise her in her rags, and she breathes a sigh of relief.

The next scene is the most extraordinary. She sobs herself to sleep resting her head on the kitchen table. Then her fairy godmother appears and with a wave of her wand the entire kitchen wall explodes like a bomb went off.  THE ENTIRE KITCHEN WALL. She doesn’t wake up at all despite a huge chunk of masonry landing on her leg. This leaves a handy hole to  view the palace and see them plotting to try the slipper on every available maiden. Then--in an amazing trick of reversing the film footage—the wall flies back up and puts itself back together like a jigsaw puzzle.

We then see them trying the slipper on every maiden in the land, and I do mean every maiden--rich or poor. We see ladies sitting in Chippendale style chairs in a garden (rich) and a lady with an apron chasing a huge flock of chickens (poor.) They both are unsuccessful at getting the slipper to fit. They go to her house and she takes off her wooden clogs and lo and behold –the slipper fits. Suddenly he recognises her, and they get married in colour. That’s right folks—the last few minutes of this early black and white film were hand coloured in a sort of garish Easter egg colour scheme. And they lived happily ever after.

You can watch it below:

That’s all for this week. Stay tuned next week for a longer silent film starring Mary Pickford.

Posted by Heather Tisdale at 00:05