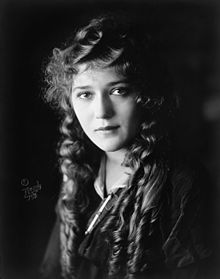 We have been looking at silent films for the past few weeks. Several have had impressive effects for their times, but also some stylised overacting (which I suppose you have to do if you have to mime everything.) This week we look at a feature length silent film made in 1914 and starring “America’s Sweetheart” Mary Pickford. Her acting is really quite good for a silent film and it is no wonder. She was a feminist pioneer actress and businesswoman. Wikipedia tells us:

With a career spanning 50 years, she was a co-founder of both the Pickford–Fairbanks Studio (along with Douglas Fairbanks) and, later, the United Artists film studio (with Fairbanks, Charlie Chaplin and D. W. Griffith), and one of the original 36 founders of the Academy of Motion Picture Arts and Sciences who present the yearly "Oscar" award ceremony.

Pickford was one of the earliest stars to be billed under her own name and was one of the most popular actresses of the 1910s and 1920s, earning the nickname "Queen of the Movies". She is credited as having defined the ingénue archetype in cinema.

She was awarded the second ever Academy Award for Best Actress for her first sound-film role in Coquette (1929) and also received an honorary Academy Award in 1976. In consideration of her contributions to American cinema, the American Film Institute ranked Pickford as 24th in its 1999 list of greatest female stars of classic Hollywood Cinema.

My overall opinion is that the acting is much better and more subtle than the other films, but the effects are rather same-y. It does however have helpful title cards to help you understand what the upcoming scene will be about.

Because this is a long film I will use Wikipedia again to help me summarise.

Cinderella is a kind young woman who lives with her wicked stepmother and ugly stepsisters. They abuse her and use her as the housemaid. One day Cinderella's stepmother and stepsisters refuse to help a beggar at their door, but Cinderella offers her food and drink. The beggar woman is revealed to be a beautiful fairy in disguise, who then secretly helps Cinderella for her kindness. One day when Cinderella is sent to gather firewood, her fairy godmother summons a troupe of fairies who secretly gather a bundle of wood for her. Cinderella meets Prince Charming who is walking in the woods, and each is smitten with the other in their short encounter.
NOTE: This is typical of Cinderella tales where her kindness must be tested to see if she is worthy of magical help. Also the meeting in the woods and falling in love is exactly how it happens in the pantomime version of Cinderella.

Soon, a ball is arranged so the prince may choose his future wife. The sisters visit a witch-like fortune teller in the woods, who predicts that a member of their family will be chosen by the prince. The sisters are delighted, thinking it will be one of them.

That night, the stepsisters have nightmares of the old fortune teller, while Cinderella has pleasant dreams of fairies dancing.
NOTE: This reminds me a bit of Macbeth where the witches tell him no man born of woman can defeat him and he totally doesn’t think there might be any other possibility and styles himself as invincible. And why are there always dancing fairies in a silent film? I wonder if this is all silent films or just fairy tales?

When the stepsisters leave for the ball, Cinderella is left behind. The fairy godmother appears asks Cinderella to bring her a pumpkin, some mice, and some rats. The fairy transforms the pumpkin into a coach, the mice into horses, and the rats into grooms and footmen. Finally, she changes Cinderella's ragged dress into a gown fit for a princess (with glass slippers, of course). She tells Cinderella she will to be back at home before the clock strikes midnight, for then, her fine dress will turn into rags and the coach and servants will become what they were before.
NOTE: Here we have all the elements we expect from a Charles Perrault version—pumpkin, mice, rats, glass slippers and midnight curfew.

The unknown lady who arrives at the ball charms the guests, and especially the prince. He and Cinderella slip away to the garden. Their flirtations are interrupted by the clock striking midnight. Cinderella rushes away, losing one of her slippers, and she arrives home, a ragged cinder girl once more.

Cinderella tosses on her bed, suffering a surrealistic dream in which evil-looking dwarves ring the midnight bell and the numbers on the clock's face dance and scramble wildly. She is awakened by the arrival of her step-family, who kick her out of bed and set her to her daily drudgery again.
NOTE: This motif of being tormented by clocks was also featured in the 1899 version.

Later, heralds announce the Prince's wish to marry the woman whose foot fits the lost shoe. The sisters go to the palace, and a comic scene ensues as each tries to force her too-large foot into the dainty slipper. The Prince learns that every girl in the kingdom save one has tried the slipper on and failed the test and announces that he will bring her to the palace himself. Finding Cinderella, he escorts her to the palace, where the slipper fits her. Her beautiful raiment is magically restored, and all bow to the future princess. Although a courtier suggests that this is an excellent opportunity for Cinderella to have her stepmother and stepsisters beheaded, she forgives them all.
NOTE: Cinderella is always nicer than I am. Off with their heads!

The prince and Cinderella again sneak away to the garden. When midnight strikes, Cinderella panics and starts to run away again, but her fairy godmother reappears and blesses her, assuring her that a good and noble spirit is always rewarded.
NOTE: I quite liked this happy ending. Cinderella will not be able to sabotage her own happiness by running away and her virtue is rewarded. Sadly, virtue should be its own reward because you can be a good person and bad things still happen but, in this case,, we get a fairy tale ending.

You can watch it here. I feel the film below has better quality (less blurry) but it only goes until she leaves for the ball.

Here is the whole film of slightly less good quality (title cards also dubbed into what I think is Spanish)but shows you all the way to the end of the film.

That’s all for this week. Stay tuned next week for the Laugh o Gram version.

Posted by Heather Tisdale at 00:12