We had a fab time in London yesterday seeing an art exhibit and going to a concert--and I will write more in depth about them soon--but I wanted to show you my newest favourite thing: 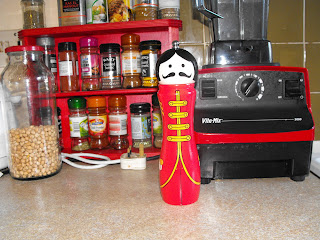 I saw this in a catalogue and have really pined for it--could not stop thinking about--I know we already have a peppermill, but this one looked like a Beatle! So when we were in London we saw it in a shop and I as squeaking and bouncing up and down and Spiderman was sighing and rolling his eyes, but he forked over a tenner so I could have it and then helped me fill it with peppercorns. What a guy!

Isn't it cute???? And it is functional cos you can really grind pepper with it as the name implies. And we do use loads of pepper. But now it will be even more fun because you twist his head and pepper comes out his butt!!!

So let me introduce to you
the one and only Billy Shears!
Sgt Pepper's Lonely Hearts Club Band!
Posted by Heather Tisdale at 07:49

Email ThisBlogThis!Share to TwitterShare to FacebookShare to Pinterest
Labels: food