It's not easy being green

Tomorrow is the big day.

Sure, we have voted before since becoming British citizens. We have gone in with the little pencil like you get in miniature golf and the bit o' paper into the study carrel and put an X by the name of the candidate which made it seem like voting for prom queen.

But this is different. This election will determine who the Prime Minister will be.

Our country has been run primarily by the Tories (Conservatives) for the last few years and frankly I am tired of the rich ole boys network that seems to reward the rich and punish the working poor. I am sick of a party who support hunting, battery cages for pheasants and wants to extend the badger cull  despite scientific evidence that proves that is not badgers that spread Bovine TB to cows but factory farming that spreads TB.

The problem is I struggle to find a party I can believe in. So far, out of the mainstream parties Labour was looking pretty good. I like Ed Miliband.  He is not slick or cool but I think that works in his favour. Our current PM David Cameron is an oily snake. It is refeshing to see someone like Miliband who is slightly awkward like the rest of us. I don't trust anyone who has an answer for everything and says it in a condescending tone of voice.

So why am I not voting Labour?

I was all set to do it. To back a party that has an actual chance of winning. I liked that Labour opposes fox hunting, the badger cull and battery cages for pheasants as well as opposes a ban on wild animals in circuses.

Then Miliband made his crucial mistake.

When discussing which parties he would NOT join in with to form a coalition in case none of the parties got a majority (which is what happened last time) he said under no circumstances would he join with the SNP (Scottish National Party)  because of their views on the Trident Missiles. The SNP wants to see them disbanded. They think spending billions of pounds each year on weapons of mass destruction that we will never use is a fool's game when schools and hospitals and everything else that has suffered cutbacks is crying out for funding.

This where he lost me.

I spent months knitting a metre square panel and joined it up with others at the Wool Against Weapons protest where people all over the world sent panels that were joined together to make a seven mile long pink scarf between two armaments factories. This matters to me and so I have to go with my gut. 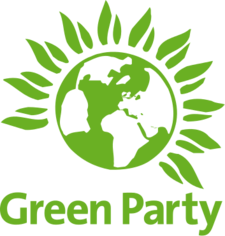 It has to be Green.

Am I throwing my vote away? Probably. But in the last general election only 60% of eligible voters even bothered to vote so if all those people who didn't vote voted Green they might have a chance.

But I can't in good conscience vote for Labour if they support trident missiles.

Polls are saying Labour is in the lead to win and I hope it is true because they are the best of the major parties even if I disagree with some of their values--if i can't have green I would prefer labour over Tory and don't get me started on UKIP.

But wouldn't the world be better if it was a little Greener?

Posted by Heather Tisdale at 12:37