I could start with C is for Cookie from Sesame Street because Sesame Street has been such an important part of my life. My first year at LC when i was still commuting form home I planned my schedule so that Tuesdays and Thursdays I could watch Sesame Street before I left for college. FACT.

Now, just letting you know--I am alphabetising like my i-pod does--by the first letter so don't go all huffy on me because Chris de Burgh is listed under C rather than D. OK? 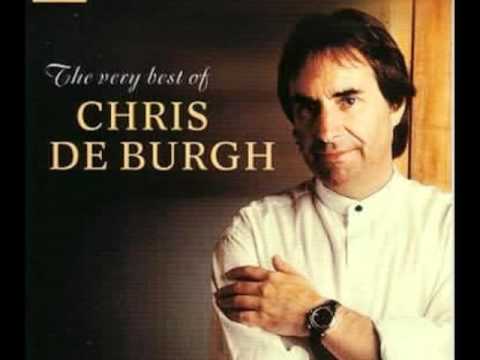 I know people take the piss out of him. The comedian Billy Bailey skewers him mercilessly over his caterpillar eyebrows. But I have a real soft spot for Chris. He is best known for his love ballad The Lady in Red which I always felt was too soppy and commercial. My favourite of his love songs has to be Where Peaceful Waters Flow because of the line:
Always, she is standing by my side.
She's my inspiration, she's my battle cry.
And in her arms is the only place I know
Where peaceful waters flow.
That song perfectly sums up how I feel about Spiderman. But I am the first to admit it is as wet as a haddock's bathing costume. No, the song I want  to share is a story song. You know how I love a song that tells a tale. Well, this is a cracker. I have very clear memories of seeing Don't Pay the Ferryman on MTV.
Watch it here:


These scruffy punksters are a world away from the clean cut romantic croonings of Chris de Burgh, but hey--I am a woman of complicated tastes. I first fell in love with The Clash in the 8th grade when Brad K gave me Rock the Casbah on a 45 record for my 13th birthday. My mum was a bit concerned that the word rock was a stand in for f*ck but in this case it really is rock because it is all about the Middle East banning Western music as decadent and harmful. The video shows an Arab and an Hasidic Jew befriending each other and skanking through Texas on a road trip. Inexplicably with an armadillo.
Watch it here:
I loved this song so much I invested in the cassette of Combat Rock from Camelot records where I fell in love with the song Know Your Rights. This powerful song from 1982 resonates today with lyrics like:
You have the right not to be killedMurder is a crimeUnless it was doneBy a policemanOr an aristocratOh, know your rights
Listen to it here:


Oh my. I was introduced to The Cocteau Twins and the ethereal voice of Elizabeth Fraser by my then boyfriend Tim T who was the gateway where I learned about so many cool and progressive alternative bands.  The music is all bells and sounds and feel like you are floating or flying,  There is a shimmering quality to it making you feel like you are submerged in water when you listen to it. but don't try to make out the lyrics because you can't. Elizabeth Fraser (who you will definitely hear more from when  we get to the letter T as she performed exquisitely with This Mortal Coil as well) uses a form of glossolalia--a sort of nonsense sounds/talking in tongues with some words in foreign languages like Gaelic and some words backwards. It is hypnotic and beautiful. I had many bootleg songs on mix tapes Tim made me and I bought many songs on cassette single. Our favourite song was Aloysius because it sounds like she is saying she f*cks the principal (see if I am wrong). Since my mother was a teacher Tim once wrote to me saying she f*cks the principal (no, not your mother!) which we found hilarious.
Listen to it here:
The Cure

Led by spiky haired, panda-eyed, smeared red lipsticked Robert Smith. Again, another band that Tim introduced me to. Their Goth, Emo, post punk, new wave sound really appealed to the me in the emotional rollercoaster of puberty. Many of the songs are quite dark and haunting. There are lots of realistic songs about the pressure to be happy (Boys Don't Cry), to have sex because there was nothing else to do (Let's Go to Bed),  the regret of having sex and the misery and shame you feel after (Siamese Twins) etc. Mum, if you are reading this--don't panic. You had less to worry about than you thought. But some of The Cure songs are decidedly strange and upbeat. The Lovecats for instance. So I will play Spiderman's favourite upbeat Cure song Friday I'm In Love (which incidentally, I can play on the ukulele)
Watch it here:
Robert Smith is also a good sport as he has voiced himself on South Park several times most notably when they had to defeat the evil giant Barbra Streisand.

No my favourite Cure song is Just Like Heaven. It tells a story so you know it is close to my heart. My second year at LC, the semester before I started dating Spiderman I went on a date with this guy named Clay. We went the Dollar Cinema (no idea what we saw) but before the film started they were playing music. This song came on-- I had only heard it once before on the radio and had fallen in love with it not knowing who sang it. It never occurred to me it could be The Cure as it was not so miserable as the other stuff I liked by them. I remember saying (rather loudly) "Oh! I love this song!" and then the music wound around me--I could physically feel it--it was shimmery and gold --and I could see the melody moving like a ribbon and it was a completely spiritual experience. I stood up--I HAD to stand up--and I stood with my arms held wide as the music washed over me. All the while i could hear Clay hissing at me to SIT DOWN! and STOP THAT! Well that was our one and only date. No surprise there. Thankfully, a few months later Spiderman came into my life and I never looked back. It still is one of my favourite songs.
Watch it here:
The Church
I will be honest, I don't know much about this one hit wonder band, I just love this song. It has that mystical jangle-y underwater feeling like the Cocteau Twins and the lead singer has a deep voice so i am sold. Plus it has what sounds like electric bagpipes in it which are really cool (but according to Wikipedia are something called a Synclavier --who knew?) So listen to Under the Milky Way.
Watch it here:

I've saved my favourite C band for last.
The Crüxshadows

You may recall we were lucky enough to see them perform live in a little Goth Club called The Purple Turtle a few years back on their As the Dark Against My Halo tour. There are no words enough to express how much we love this band If you want all the gushings about why they are so important  to me you can read it here: http://spidergrrlvstheworld.blogspot.co.uk/2013/08/embracing-our-inner-goth.html

But the main thing I love is the complicated layering of electronic music, the way it makes you want to dance (or at least tap your toe if you are Spiderman) and the overwhelming positiveness of the  lyrics. Lead singer Rogue is one of the few people I would say had real charisma. He is so amazing and shines like a beacon that you can't take your eyes off of him. I could name dozens of songs that we adore, but these are a few of favourite things.Birthday. This song inspires me to be a better person every time I listen with the lyrics look at your life. Who do you want to be before you die?
Watch it here:
I wanted to choose something from As the Dark Against My Halo. It was a hard choice. In the end I choose Valkyrie.

That's the end of my C songs. What are your favourite C bands? Have you ever had a spiritual experience because of music like I did with the Cure?
Posted by Heather Tisdale at 23:06