What We Ate Wednesday--Spag Bol

Hello lovelies! Today I want to share with you my recipe for Spaghetti Bolognese. I often hear it lovingly shortened to Spag Bol.  It is traditionally a tomato sauce made with ground beef  served over pasta. I am sure I must have eaten it as a child, but somehow I always picture spaghetti with meatballs. In my version, I substitute puy lentils for the ground meat for a stick-to-your-ribs pasta sauce. I even make a vegan Parmesan cheese to put on top!

This is one of our favourite meals and I have served it to company who declared it as tasty as the meaty one. This makes enough for 3 bowls (which is eaten by two greedy people!) and is easily doubled.

One thing I like to do if I have time is to soak my lentils for a few hours ahead of time as it can speed up their softening in cooking, but it is by no means necessary. 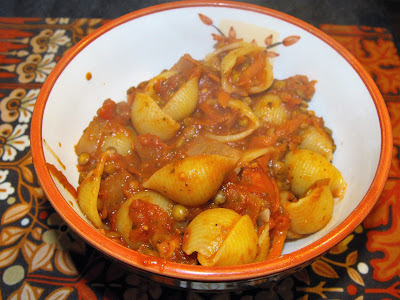 My recipe is based on the one from the Jack Monroe cookbook A Girl called Jack. It is not a vegan cookbook (although Jack is vegan now!) but rather it is budget cookbook. There are 100 recipes and at least 50 are vegan and a further 30 or so are easily adapted to being vegan with a substitute for cheese or margarine instead of butter. A vegan diet is a cheap diet when you stick to wholefoods and use things like beans and lentils instead of processed veggie burgers.  I used gluten free shell pasta as that is what I had, but traditional spaghetti would obviously work, too.

1. Cook your onion in a bit of oil or water until soft. Add the garlic and the carrot and cook for a further few minutes.
2. Add the herbs and the wine and increase the heat.
3. Add the mushrooms, stock cube or powdered stock, sundried tomatoes (if using), lentils, tin of tomatoes, water and tomato puree. Bring to the boil, then simmer until lentils are tender--about 25 minutes or so. If it seems too thick, add a splash more water.
4. After 25 minutes of simmering, then start boiling your water for pasta. Allow a heaping 3/4 cup pasta per person (70g) or a full cup per person (100g). Boil the pasta as the packet tells you to, then drain and add to the pasta sauce. Mix up all the sauce with the pasta. We prefer this method instead of putting pasta in your bowl and then ladling the sauce on top. I learned this method from my friend Angie Nida Marable.  Growing up it stopped arguments at the table of who had more and who had less. Not that I think Spiderman and I would argue over it...we just both want our fair share of this dish. 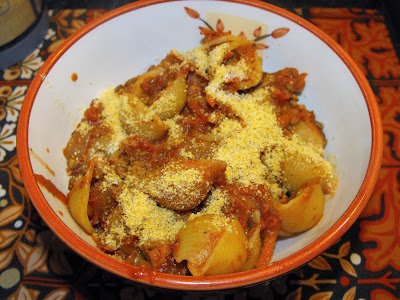 During that 25 minutes while the sauce is simmering, make your Parmesan cheese.

That's it! Sprinkle artistically on top of your Spag Bol (and if I am honest, take your photo and then add several spoons more of this lovely stuff) and eat it all up! If you have any Parmesan left over, store it in the fridge.

That's it. A recipe adapted from a traditional one, but made healthier, cheaper and even more delicious (you don't have to drain all the saturated fat off the ground meat) so tuck in and enjoy!

Posted by Heather Tisdale at 01:37