Loyal reader, I had not intended to include this song in my list of favourite murder ballads. It had completely slipped my mind. As I was writing last week's entry I was completely prepared to move straight into a song about a school shooting. I had the next seven weeks of murder ballads planned out.

Then last week, I was listening to the radio and this song came on. I boogied around our kitchen pretending to be a sexy showgirl until the part of the song comes on and you don't know who has been shot and I suddenly realised--This is a murder ballad.

I had never considered it that way before, but it fits. It has all the hallmarks of a murder ballad. It tells a story. A jealous lover. Someone dies. A mystery. It just does it to a disco beat. It's from Barry Manilow's 1978 album Even Now. 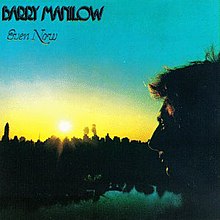 This was a favourite song from my childhood, precisely because it tells a story that could be easily acted out. I spent a great portion of my childhood dressing up and acting in front of a mirror. I preferred characters who were sad or downtrodden or bravely dying so I could try to make myself cry. I played orphans, teens with a drinking problem or unwanted pregnancy as well as Beth from Little Women and Lenny shooting George from Of Mice and Men.

Lola the showgirl was perfect for me as she showed character progression. One minute she was doing the cha-cha, the next she was a faded alcoholic. I had this yellow sparkly outfit that I had left over from a dance recital that had some yellow feathers on it. I used to put it on and reenact this song in front of the mirror. It was also the perfect song for me as I loved (still do!) disco. Spiderman says this tells you everything you need to know about me.

I loved the very precise descriptions--they worked from eight til four. I used to ponder over that. Was that eight at night until four in the morning? Surely not! But it was a club . . . so perhaps so. We get a good description of Lola's clothing (yellow feathers in her hair and a dress cut down to there) but we never find out about Tony's appearance. He tended bar, so I always pictured him in one of those half aprons and looking like Isaac the bartender from The Love Boat as this was my entire frame of reference for bartenders at this point in my life. Now Rico, he wore a diamond. I spent many hours contemplating this fact. Where did he wear it? As a pin on his lapel? In a ring? I asked my father where men might wear a diamond and he suggested cuff links and then explained what cuff links were. I rejected this theory because cuff links come in pairs and the song only mentions a diamond in singular. My father then suggested it was on his tie-pin.  I also loved the mystery element to it. You know that Tony and Rico had a struggle and as the song says, But just who shot who?
Then you find out that Tony was killed which caused Lola to sit there so refined and drink herself half-blind and you are left to wonder--what happened to Rico? Was he charged with murder?

Sound effect fact: I adored the bit where Rico called her over and whistled. I used to act this bit too as I knew just what sort of "c'mon" gesture that was required.

Silly fact: My friend Tammy and I used to occasionally sing the lyrics She lost her youth and she lost her toenail, now she's lost her mind.

So, here I leave you with the only disco murder ballad I am aware of. If you know of another one, please let me know.


And to double your pleasure, here is Liza Minnelli singing Copacabana on the Muppet Show.

Her name was Lola, she was a showgirl
With yellow feathers in her hair and a dress cut down to there
She would merengue and do the cha-cha
And while she tried to be a star, Tony always tended bar
Across a crowded floor, they worked from 8 till 4
They were young and they had each other
Who could ask for more?

His name was Rico, he wore a diamond
He was escorted to his chair, he saw Lola dancin' there
And when she finished, he called her over
But Rico went a bit too far, Tony sailed across the bar
And then the punches flew and chairs were smashed in two
There was blood and a single gun shot
But just who shot who?

Her name is Lola, she was a showgirl
But that was 30 years ago, when they used to have a show
Now it's a disco, but not for Lola
Still in the dress she used to wear, faded feathers in her hair
She sits there so refined, and drinks herself half-blind
She lost her youth and she lost her Tony
Now she's lost her mind!

That's all for this week. Stay tuned next week for a murder ballad about a school shooting.

Posted by Heather Tisdale at 00:49