Hello lovelies! Autumn is definitely in the air. It makes me crave warm spiced food in autumnal colours. How about you?

I recently borrowed a cookbook from the library. It was a weighty tome, the latest from Hugh Fearnley Whittingstall entitled Much More Veg.  There was this interesting recipe that was an orange spiced barley.  It took an hour to prepare and was made to feed six people. I liked the idea, but didn't want to feed a crowd (just two greedy vegans), plus I wanted it gluten free.

So, I copied the spice profile, made it with rice and chickpeas to make it more of a meal and served it with some roasted root veggies. I think Hugh Fearnley Whittingstall would approve.

It was delicious and had a real autumnal taste--like an orange pilaf. And the flavour of the rice was greatly enhanced by the carrots and parsnips. 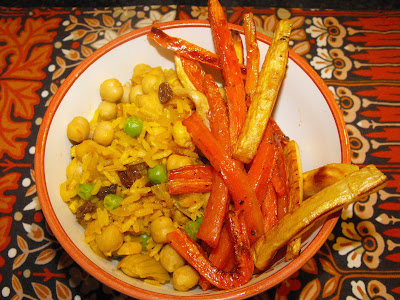 Autumn Spiced Rice with Roasted Parsnips and Carrots
Preheat your oven to 220C/425F and put your roasting pan in the oven while it heats up. This is secret to making good roasties.

For the roasties:
Slice two carrots and two parsnips into long batons and place in a large bowl with one TB oil and salt and pepper and set aside for oven to heat.

When the oven has preheated, carefully take out the hot roasting pan and throw in your roasties. They will sizzle! Spread them out so they are all in one layer and put in the oven for 20 minutes.  Meanwhile, start the rice as soon as the roasties go in the oven. 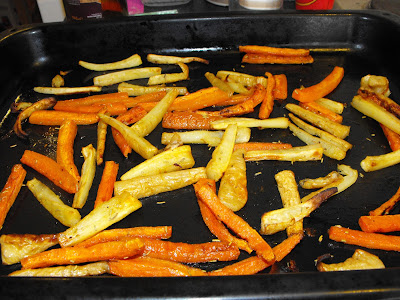 In a large pot, cook your onion and garlic in a splash or oil or water for a few minutes until softened. then add your spices, rice and raisins and stir to coat.

Add your orange juice and zest, plus the boiling vegetable stock. Bring to the boil then reduce heat, cover and simmer until rice is nearly cooked. (It will take longer than normal due to the orange juice)

When the timer goes off for the roasties, take them out and stir. Then drizzle with liquid sweetener like maple syrup, agave or golden syrup. Put back in the hot oven until the pilaf is ready.

When the rice is nearly ready, add the chickpeas, defrosted peas and apricots. Let it continue cooking until all the liquid has absorbed and the peas are warmed.

The warming spices and delicate orange flavour really are enhanced by the sweetness of the dried fruit as well the caramelised roasties. Definitely a meal we will have again throughout the autumn.

It was also economical as there were lots of dried apricots left for snacking as well as putting in a cake (I used my standard vanilla cake recipe, but subbed orange juice for the plant based milk and added warming spices like cinnamon and ginger and threw in some diced apricots).