Hello and welcome to Murder Ballad Monday, or perhaps I should say welcome to Murder Story Monday as for the next few weeks I want to continue with the theme that was explored in the ballad The Twa Sisters, but in prose form as opposed to lyrical form.

Whereas 305 traditional ballads were collected and categorised by Francis James Child (hence the name "Child Ballads") in the late 19th century, fairy tales and folk tales are classified under the Aarne-Thompson-Uther Tale Type Classification (ATU).

The type of folk tale I am interested in for the purposes of this blog is ATU 780, also known as The Truth Comes to Light.

In both the ballad and the prose versions, the bones of the wronged person speak up and "the truth comes to light."  In the ballad version, it is always one sister who kills another, but it many of the folk tale versions it is brother killing brother.

The folk tale I would like to begin with today is one that I remember from my childhood. It is a story by the Brothers Grimm entitled The Singing Bone. Author and illustrator extraordinaire Shaun Tan has created sculptures for many major and minor Grimm's tales in his book The Singing Bones. 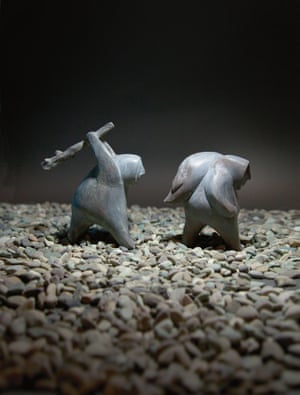 The Singing Bone was originally published in the Grimm's Kinder- und Hausmärchen (Children's and Household Tales) in 1812. Here is a copy of the Grimm's Fairy Tale The Singing Bones courtesy of  http://www.pitt.edu/~dash/type0780.html

A wild boar was wreaking havoc throughout the country. No one dared venture into the forest where it ran about. With its tusks it ripped to pieces anyone who was bold enough to pursue it and attempt to kill it. Then the king proclaimed that anyone who could kill the boar would receive his daughter for a wife.

There were three brothers in the kingdom. The oldest was sly and clever; the second was of ordinary intelligence; but the third and youngest was innocent and slow witted. They wanted to win the princess, so they set forth to seek out the wild boar and kill it.

The two oldest ones went together, while the youngest one went by himself. When he entered the woods an old man approached him. He was holding a black lance in his hand, and said to him, "Take this lance and fearlessly attack the boar with it, and you will kill it." And that is what happened. He struck the boar with the lance, and it fell dead to the earth. Then he lifted it onto his shoulder, and cheerfully set off toward home.

On the way he came to a house where his brothers were making merry and drinking wine. When they saw him with the boar on his back, they called to him, "Come in and have a drink with us. You must be tired." The innocent simpleton, not thinking about any danger, went inside and told them how he had killed the boar with the black lance, and rejoiced in his good fortune. That evening they returned home together. The two oldest ones plotted to kill their brother. They let him walk ahead of them, and when they came to a bridge just outside the city, they attacked him, striking him dead. They buried him beneath the bridge. Then the oldest one took the boar, carried it to the king, claimed that he had killed it, and received the princess for a wife.

Many years passed, but it was not to remain hidden. One day a shepherd was crossing the bridge when he saw a little bone beneath him in the sand. It was so pure and snow-white that he wanted it to make a mouthpiece from, so he climbed down and picked it up. Afterward he made a mouthpiece from it for his horn, and when he put it to his lips to play, the little bone began to sing by itself:

Oh, dear shepherd
You are blowing on my bone.
My brothers struck me dead,
And buried me beneath the bridge,
To get the wild boar
For the daughter of the king.

The shepherd took the horn to the king, and once again it sang the same words. After hearing this, the king had his people dig under the bridge, and they soon uncovered the skeleton. The two wicked brothers confessed their crime and were thrown into the water. The murdered brother's bones were laid to rest in a beautiful grave in the churchyard.

That's all for week one of Murder Story Monday. Stay tuned next week for a version of the Singing Bone from French Louisiana.

Posted by Heather Tisdale at 23:52