This week we are looking a version entitled The True History of Little Golden Hood by French writer Charles Marelles. It is said he was dismayed at the unhappy ending of his countryman Charles Perrault’s tale and so he wrote a version of his own in 1888. It was published in 1890 by Andrew Lang in his Red Fairy Book.

I really like this tale as it is less about being a victim and more about being empowered, which is pretty impressive for 1888. Admittedly, Little Golden Hood is a bit dozy and feckless at the start but is saved by her wise Granny who has cleverly thought to put a magic spell on the child’s hood. Then when confronted with the wolf, doesn’t get eaten, but captures him a sack like “a letter in the post” and throws him down the well with the intention of turning his pelt into a muff and feeding his bones to the dogs. Little Golden Hood is hysterical at this point and calling out for her mother, but Granny gives her a bit of cake and wine to help her calm down. It ends with her learning her lesson (as in the Grimm’s tale) but one rather thinks the lesson is less to always be obedient, but rather to grow up to be wise badass like her Granny. 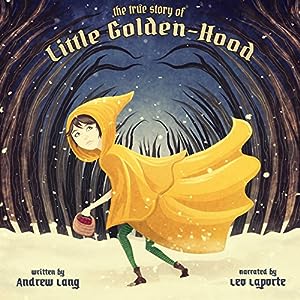 YOU know the tale of poor Little Red Riding-hood, that the Wolf deceived and devoured, with her cake, her little butter can, and her Grandmother; well, the true story happened quite differently, as we know now. And first of all, the little girl was called and is still called Little Golden-hood; secondly, it was not she, nor the good grand-dame, but the wicked Wolf who was, in the end, caught and devoured.

There was once a little peasant girl, pretty and nice as a star in its season. Her real name was Blanchette, but she was more often called Little Golden-hood, on account of a wonderful little cloak with a hood, gold-and fire-coloured, which she always had on. This little hood was given her by her Grandmother, who was so old that she did not know her age; it ought to bring her good luck, for it was made of a ray of sunshine, she said. And as the good old woman was considered something of a witch, everyone thought the little hood rather bewitched too.

And so it was, as you will see.

One day the mother said to the child: 'Let us see, my little Golden-hood, if you know now how to find your way by yourself. You shall take this good piece of cake to your Grandmother for a Sunday treat to-morrow. You will ask her how she is, and come back at once, without stopping to chatter on the way with people you don't know. Do you quite understand?'

'I quite understand,' replied Blanchette gaily. And off she went with the cake, quite proud of her errand.

But the Grandmother lived in another village, and there was a big wood to cross before getting there. At a turn of the road under the trees, suddenly 'Who goes there?'

He had seen the child start alone, and the villain was waiting to devour her; when at the same moment he perceived some wood- cutters who might observe him, and he changed his mind. Instead of falling upon Blanchette he came frisking up to her like a good dog.

' 'Tis you! my nice Little Golden-hood,' said he. So, the little girl stops to talk with the Wolf, who, for all that, she did not know in the least.

'My name is friend Wolf. And where are you going thus, my pretty one, with your little basket on your arm?'

'I am going to my Grandmother, to take her a good piece of cake for her Sunday treat to-morrow.'

'And where does she live, your Grandmother?'

'She lives at the other side of the wood, in the first house in the village, near the windmill, you know.'

'Ah! yes! I know now,' said the Wolf. 'Well, that's just where I'm going; I shall get there before you, no doubt, with your little bits of legs, and I'll tell her you're coming to see her; then she'll wait for you.'

Thereupon the Wolf cuts across the wood, and in five minutes arrives at the Grandmother's house.

He knocks at the door: toc, toc.

Then he stands up on end, puts his two fore-paws on the latch and the door opens.

Not a soul in the house.

The old woman had risen early to sell herbs in the town, and she had gone off in such haste
that she had left her bed unmade, with her great night-cap on the pillow.

He shuts the door, pulls on the Grandmother's night-cap down to his eyes, then he lies down all his length in the bed and draws the curtains.

In the meantime, the good Blanchette went quietly on her way, as little girls do, amusing herself here and there by picking Easter daisies, watching the little birds making their nests, and running after the butterflies which fluttered in the sunshine.

At last she arrives at the door.

'Who is there?' says the Wolf, softening his rough voice as best he can.

'It's me, Granny, your little Golden-hood. I'm bringing you a big piece of cake for your Sunday treat to-morrow.'

'Press your finger on the latch, then push and the door opens.'

'Ahem! a little, a little . . .' replies the Wolf, pretending to cough. 'Shut the door well, my little lamb. Put your basket on the table, and then take off your frock and come and lie down by me: you shall rest a little.'

The good child undresses but observe this! She kept her little hood upon her head. When she saw what a figure her Granny cut in bed, the poor little thing was much surprised.

'Oh!' cries she, 'how like you are to friend Wolf, Grandmother!'

'That's on account of my night-cap, child,' replies the Wolf.

'All the better to hug you, my child.'

'Oh! what a big tongue you've got, Grandmother!'

'All the better for answering, child.'

'Oh! what a mouthful of great white teeth you have, Grandmother!'

'That's for crunching little children with! 'And the Wolf opened his jaws wide to swallow Blanchette.

But she put down her head crying:

'Mamma! Mamma!' and the Wolf only caught her little hood.

Thereupon, oh dear! oh dear! he draws back, crying and shaking his jaw as if he had swallowed red-hot coals.

It was the little fire-coloured hood that had burnt his tongue right down his throat.

The little hood, you see, was one of those magic caps that they used to have in former times, in the stories, for making oneself invisible or invulnerable.

So there was the Wolf with his throat burnt, jumping off the bed and trying to find the door, howling and howling as if all the dogs in the country were at his heels.

Just at this moment the Grandmother arrives, returning from the town with her long sack empty on her shoulder.

'Ah, brigand!' she cries, 'wait a bit!' Quickly she opens her sack wide across the door, and the maddened Wolf springs in head downwards.

For the brave old dame shuts her sack, so; and she runs and empties it in the well, where the vagabond, still howling, tumbles in and is drowned.

'Ah, scoundrel! you thought you would crunch my little grandchild! Well, to-morrow we will make her a muff of your skin, and you yourself shall be crunched, for we will give your carcass to the dogs.'

Thereupon the Grandmother hastened to dress poor Blanchette, who was still trembling with fear in the bed.

'Well,' she said to her, 'without my little hood where would you be now, darling?' And, to restore heart and legs to the child, she made her eat a good piece of her cake, and drink a good draught of wine, after which she took her by the hand and led her back to the house.

And then, who was it who scolded her when she knew all that had happened?

It was the mother.

But Blanchette promised over and over again that she would never more stop to listen to a Wolf, so that at last the mother forgave her.

And Blanchette, the Little Golden-hood, kept her word. And in fine weather she may still be seen in the fields with her pretty little hood, the colour of the sun.

But to see her you must rise early

Stay tuned next week for a version by Walter de la Mare which emphasises the greed and shallowness and vanity of the young woman in the red hood, but does it with a twinkle in his eye.
Posted by Heather Tisdale at 00:10