Switch on the Night

Last night we heard on the radio of the death of author Ray Bradbury at age 91.  Spiderman and I are big fans of his work.  Have you read Fahrenheit 451?  It was published in 1953, depicts a future society in which books are banned. In the end there are people who ARE the book--they have memorised an entire work that is meaningful and they become the living book--keeping the words alive in their hearts despite the oppression.

The story, which gets its title from the temperature at which paper supposedly ignites, proved to be uncannily prophetic - the characters are addicted to television soap operas, while miniature headphones, known as "ear thimbles", provide a constant stream of music and news. Isn't that freaky?

My favourite short story was called All Summer In a Day.
From Wiki:
The story is about a class of school children on Venus, which in this story is a world of constant rainstorms, where the sun is only visible for two hours every seven years.
One of the children, Margot, moved to Venus from Earth five years earlier, and she is the only one in her class to remember sunshine, since it shone regularly on earth. She describes the sun as "a penny", or "like a fire in the stove", and the other children, being too young to have ever seen it themselves, refuse to believe her accounting of it. Out of jealousy, she is bullied and ostracized by the other students and finally locked in a closet during the time the sun is due to come out.
As the sun is about to appear, their teacher arrives to take the class outside to enjoy their only hour of sunshine, and in their astonishment and joy, they all forget about Margot. They run, play, skip, jump, and prance about, savoring every second of their newly found freedom. "It's much better than sun lamps!" one of them cries.
Suddenly, a girl feels a raindrop on her. Thunder sounds, and they run back inside. Then, one of them remembers Margot, who is still locked in the closet. They stand frozen ashamed for what they have done, unable to "meet each other's glances."
The precious sun has come and gone, and because of their despicable act, Margot has missed it. They walk slowly and silently towards the closet, and let her out.

Scroll down to the bottom of the Wikipeadia page and there is a link where you can open it as a word document. http://en.wikipedia.org/wiki/All_Summer_in_a_Day 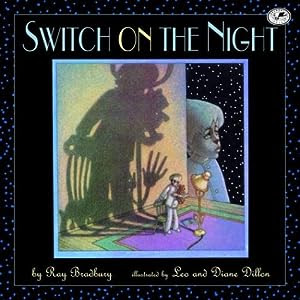 There is a lovely picture book lovingly illustrated by Diane and Leo Dillon called Switch On The Night. According to Amazon:
A LONELY LITTLE boy who is scared of the dark sits in his room alone, with only light for company, until a little girl named Dark appears and shows him that light switches don’t just switch off the light—they switch on the night. And to switch on the night is to switch on the stars, the moon, the crickets, and the frogs. With the Dillons’ dreamlike illustrations, Switch on the Night is sure to reassure any child who has felt afraid of the unkown; the story will also impress adult readers with its imaginative approach to understanding that which is different.

His work was hugly influential and still continues to be read today in classrooms all over the world because as the man himself put it,
Do you know why teachers use me? Because I speak in tongues. I write metaphors. Every one of my stories is a metaphor you can remember.


Goodnight.
Posted by Heather Tisdale at 02:42