Last week we looked at a tale by Tanith Lee that began to change the views of sexuality that had previously been associated with Little Red Riding Hood. This week we look at the woman who started it all: Angela Carter.  Her pivotal collection of short stories The Bloody Chamber was full of dark, feminist fairy tales filled with  bestial and ferocious heroines. This book changed my life and much of my short story writing owes a huge debt to Angela Carter.

A film was made of The Company of Wolves which we will look at next week.

This story is all about the awakening of sexuality. Whereas in the story by Charles Perrault, female sexuality is to be guarded from the predatory wolf-man, here the girl is ripe and ready. The story says:


She stands and moved within the invisible pentacle of her own virginity. She is an unbroken egg; she is a sealed vessel; she has inside her a magic space the entrance to which is shut tight with a plug of membrane; she is a closed system; she does not known how to shiver. She has her knife and she is afraid of nothing.


She wants to venture into the woods. She wants to meet danger. And when she meets the huntsman, hairy as any wolf, she seduces him at granny's cottage. She throws her clothes on the fire (which harks back to some of the oldest versions of this tale) and when he says the classic line "All the better to eat you with," the story says:
The girl burst out laughing; she knew she was nobody's meat. She laughed at him full in the face, ripped off his shirt for him and flung it into the fire, in the fiery wake of her own discarded clothing. The flames danced like dead souls on Walpurgisnacht and the old bones under the bed set up a terrible clattering, but she did not pay them any heed.

She knew she was nobody's meat is possibly my favourite line in any story I have ever read.

Together they enter into a sort of  savage marriage ceremony, She will be consumed and she will like it. 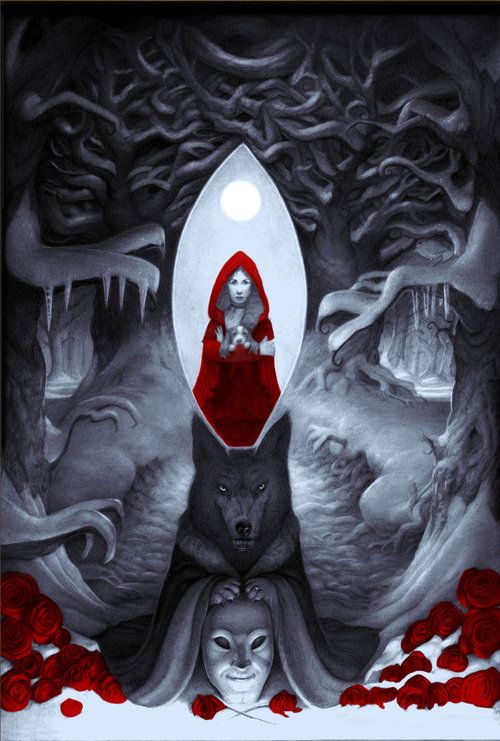 Click on the link to read an excerpt from THE COMPANY OF WOLVES .

Next week we look at the film adaptation.

Posted by Heather Tisdale at 01:20