Last week we looked at the short story The Company of Wolves by Angela Carter. This week I want to look at the fantasy/horror film that was made of this story by director Neil Jordan (The Crying Game and Interview With the Vampire to name but a few). 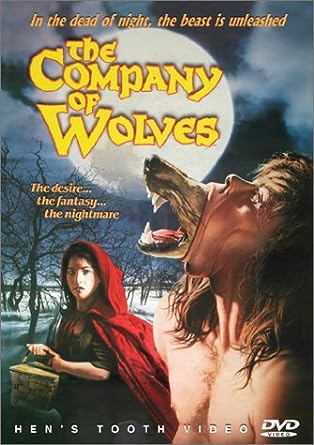 The story is a series of tales about wolves which include transformations, curses as well as the seduced by a wolf storyline of Little Red Riding Hood. Angela Carter adapted her story for the silver screen and  turned these vignettes into tales told to our red-caped protagonist Rosaleen by her superstitious grandmother. Rosaleen is dreaming these stories as she deals with puberty and her sexual awakening. The dreams are eerie and unsettling and full of strange symbols as the real Rosaleen tosses and turns in bed, fitfully dreaming tales of sex and seduction by wolves.

It had some of the best effects for its time and was truly scary. Some of the tales told by the grandmother (wonderfully played by Angela Lansbury) are about a woman whose husband when out on their wedding night to answer a call of nature (despite the howling of the wolves outside) and never returned. She found a man not too shy to piss in a pot and married him, but after several years when she had born him children, the first husband appeared. He angrily calls her slut and transforms into a wolf, but is slain by her new husband. He is decapitated and wolf head flies off and lands in the bucket of milk where it transforms back into the image of her first love.

In another tale, a woman is wronged by a rich nobleman and turns up at his wedding visibly pregnant. She calls out the nobleman and all of his rich cronies for the bigoted actions and declares "the wolves in the forest are more decent." It turns out she is a sorceress and turns the entire wedding party into wolves and orders them to serenade her and her child every night with their howling.

But the storyline I want to talk about is the one dealing with the awakening of Rosaleen's sexuality.
Her granny has told her to "never trust a man whose eyebrows meet in the middle" but she meets one and she does.


As in the book, Rosaline comes in to find the huntsman has devoured her grandmother and still gives herself willingly to him. In the film, Rosaleen accidentally wounds him with his rifle and he transforms (in possibly the freakiest effect I have ever seen) into a wolf. She sees him and is not afraid. She feels tenderly towards him and reaches out to caress him. When the villagers turn up Rosaleen has also transformed into a wolf and the pair escape to the forest.


The ending of the film has Rosaleen awaken in the real world as a wolf jumps through her window and lunges at her. All of her childhood toys come crashing to the ground and she screams. Her grandmother's voice can be heard reading something that resembles Perrault's moralistic ending to Little Red Riding Hood.

Stay tuned next week as we start to look at our tale from deep Into the Woods.
Posted by Heather Tisdale at 23:09