What We Ate Wednesday--Chickpea Salad (Chicken Salad knock off)

Hello lovelies! With the weather hotting up I want to eat more salads, but need a bit of something substantial to go with it. It needed to be easy to bring to work and light but filling.

At first I was bringing some lettuce and a small refillable bottle of dressing, but it leaked in my bag and was a faff to carry about even before the leak. Plus I was still hungry with just salad so had to pack several other containers on more filling foods like hummus and crackers which took up so much space in my bag. It was like carrying enough food for Coxey's Army (as my dear old Mum would say.)

I read somewhere about watering down hummus as a salad dressing and I thought it might give me more protein, but then there was the leakage issue. I did NOT want to deal with that again.

Then suddenly, I got a brilliant idea. Why not make a vegan version of something like Chicken Salad? Now, Chicken salad is traditionally mayonnaise based. I don't do the white stuff. Nuh uh. No goo for me. Never liked it, never will. There are vegan versions of mayo out there, but they still all look like pus. And probably taste like it too.

Sorry...but it is true. I am president of the I HATE MAYO society.

Also, non vegan mayo can go bad in hot weather. Maybe vegan mayo does the same? (Though how could you tell when it already tastes gross?) The shop where I work is hot and there is no fridge.

I needed a non mayo based lunch idea.

Enter tahini. High in calcium. Sticky enough to bind it all together. Makes it tastes like hummus. (It is a key ingredient in hummus, after all.)

So I started researching recipes and combining ingredients I liked and rejecting ones I didn't. I came up with a sort of chunky hummus with lots of flavour.  The recipe I took most of my inspiration from was from THE SIMPLE VEGANISTA, but I still made several changes.

It makes enough for 6 roughly half cup servings. After I make it, I portion it into six small containers so I can just grab and go for lunch. I choose to put it in six containers rather than one bigger one because I have a small British sized fridge there is just not enough room for a second large container. (I already store all my salad greens in a large container wrapped in a tea towel to absorb moisture. See HERE for details on how keep your salad from wilting.) With six small containers, I can stash them all over the fridge, on every shelf  and in every nook and cranny. 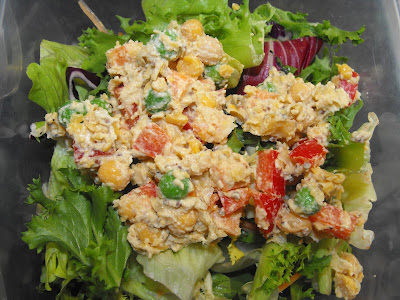 Chickpea Salad
1 tin chickpeas, roughly mashed
half a chopped pepper
half a finely diced carrot
half a cup frozen peas, defrosted in boiling water
1/4 cup hummus or tahini, watered down to make it runny
half a teaspoon garlic powder
1-2 TB whole grain mustard
3-4 TB lemon juice
shake of smoked paprika
salt and pepper to taste
optional: a few chopped gherkins and a TB of pickle juice


Basically, mash your chickpeas and mix everything else in. That's it.

I have heard of recipes that also included chopped apple or chopped grapes.  Many recipes used celery, but we don't like it, so i don't buy it. Some recipes used chopped spring onions, but they are 70p a bunch for just one recipe. I'd rather spend that money towards some nicer mixed salad greens.

You could also add chopped nuts or sunflower seeds for extra crunch. I find that the nuts and seeds get softer as the week goes on, so I tend to add them on the day, so they stay crunchy.

And you could, if you just absolutely have to, use mayo instead of tahini. But I leave you with these wise words from Peggy Rathman's Officer Buckle and Gloria: 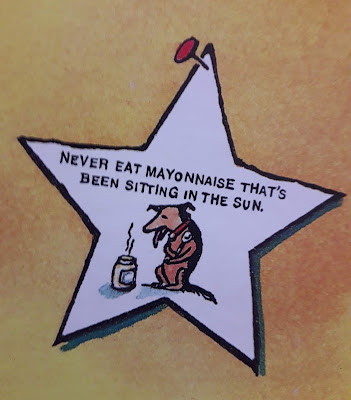 Posted by Heather Tisdale at 00:19