What We Ate Wednesday--Italian Pasta Salad

Hello lovelies. Still in the grip of a heatwave, I'm afraid. But never fear, this pasta salad is quick and easy to make. And basically the only heat comes from the boiling of the pasta.

I saw this recipe on a non vegan friend's Facebook page in a recipe video. As I have done previously, when I see something non vegan but delicious looking I become Captain Vegan who can leap tall buildings with a single bound and veganise any recipe.

Basically, it is chopped cherry tomatoes, cucumber and olives over pasta in a dressing of Italian Vinaigrette and Parmesan cheese.

It doesn't get any more basic than that.

Can you even call it a recipe?

The first time I made it, I marinated the tomatoes and cucumber in the dressing and used half in the pasta and the next day had the other half as a side dish with some homemade GF olive bread and hummus. The next time we had the whole she-bang in with the pasta.

The good thing about this is if you want to be lazy you could use bottled Italian dressing and something like Good Carma vegan Parmesan. I made both of mine from scratch, but you certainly don't have to.

Even doing it from scratch took no time at all.

Notes on tomatoes:
Choose really deep red vine cherry tomatoes that are sweet. Not big mealy ones that look anaemic. Because we are eating them raw, I spend extra money on Sugardrop tomatoes which you can read about HERE. They are really sweet and lovely and according to the article are "as sweet as a peach."

Also, when I looked for bottle Italian dressing in the UK I discovered that what I think of as Italian Vinaigrette dressing is called French Vinaigrette here.  To me, French dressing is some red gloopy stuff that is really sweet. But what you want is an oil and vinegar with herbs sort of thing. Ya know what I mean? 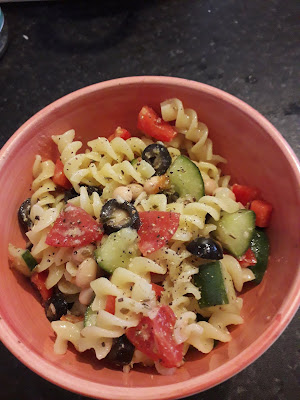 Boil 2 cups of your favourite pasta according to package directions.

Meanwhile mix together:
220 grams sweet cherry tomatoes (cut in half or quarters)
1 cucumber, diced
handful of olives (or more to your liking)
half a cup Italian Vinaigrette (or is that French?)
half a cup vegan Parmesan

Add the pasta and salt and pepper. That's it. You can stop sweating and back out of the kitchen. You're done. 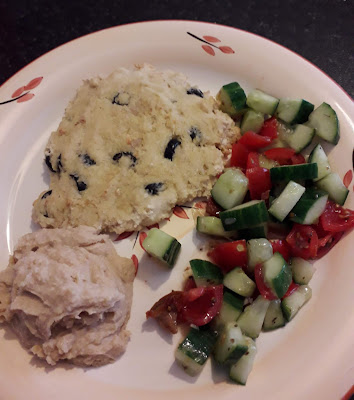 If you fancy making it go for two meals then save back half of the marinated tomatoes and cukes and eat it the next day with toasty bread of your choice and a dollop of hummus.
Posted by Heather Tisdale at 03:05