What We Ate Wednesday--Tofu Scramble and Sausage Flavoured Potatoes

Hello lovelies! We don't really eat that much soy these days. We've nothing against it. It's just expensive compared to other protein sources.  A packet of tofu is around £2.99 and a tin of chickpeas is around 33p.

However, recently a friend gave us a hamper full of vegan goodies which included some vegan cheeses and some tofu. The only catch was that the tofu was close to its sell by date.

Not a problem. I dug out my recipe binder and scoured for a tofu recipe. Many of them involved turning the oven on and there was no way in hell I was doing that. It's too hot to have oven time with no air conditioning. Our kitchen faces west so gets the later afternoon/evening sun quite strongly through a huge floor to ceiling window that is directly opposite the cooker. So that would be no oven for me until the temps drop again.

So i decided on Tofu Scramble.  I knew I wanted some sort of potatoes with it, but wanted to jazz up just plain boiled taters. I decided to use the spices in the POST PUNK KITCHEN TEMPEH SAUSAGE CRUMBLES on the potatoes and this was an extremely good idea, if i do say so myself.

Over the years we have adapted this recipe. First it was tempeh, then it was mushrooms. Mushrooms are cheap and have a meaty flavour. But putting the spices onto the potatoes will open up another way to enjoy the delicious flavour of sausage-y spices without the cruelty.

I do love a spot of BRINNER (my new favourite portmanteau word for BReakfast  for dINNER.) 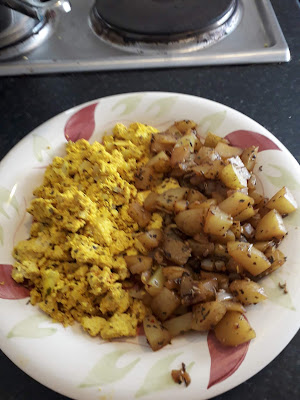 Boil these in strong vegetable stock. When tender enough to be easily pierced by a knife, drain in a colander. Then wait until the scramble is going. 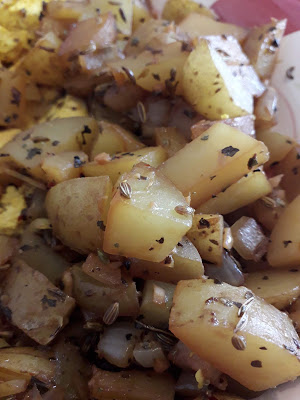 The scramble:
packet of tofu (450g?) crumbled (mine was quite firm and I had to get my potato masher out)
1 onion, finely diced
half a pepper (optional. I had one so used it)
a few cloves crushed garlic
3 TB nutritional yeast flakes
juice of half a lemon (2 TB)
splash tamari or soy sauce
1 tsp dried basil
1 tsp dried oregano
salt and pepper to taste
1/2 tsp each or more turmeric and smoked paprika for colour. Just keep shaking on until the colour is a rich yellow.
optional: if you have some black salt now is the time to use it. it has a weird sulphur-y farty smell reminiscent of eggs.

1. If you haven't already--boil your taters in veg stock.
2. While the potatoes are coming to the boil, cook your onion and garlic and optional pepper in a little broth you spooned out of the potato pan.
3. Add the tofu and keep stirring until incorporated with your onion mixture. Add the tamari and lemon and stir to coat. Add the herbs and stir to coat. Add the spices and salt and pepper and keep stirring. Add more spices if you want it to look more yellow.
4. While you are scrambling the tofu, heat 1 TB oil in a frying pan.
5. Either take the scramble off the heat for a few minutes or keep an eye on it and stir occasionally making sure it is not sticking. I opted to take it off the heat.
6. Drain the potatoes and add them to the hot oil. Fry for a few minutes until the taters are coated. Then add the tamari and lemon and cook until the liquid is nearly absorbed. Add the herbs/spice mixture and stir to coat.
7. Put the scramble back on the heat and re-heat if it has gotten cold.
8. Serve.

This was really delicious, especially the potatoes. The tofu made me fart like a horse so it probably is just as well we don't have it too often. Poor Spiderman would need to be issued with a WWII gas mask!

We will definitely have the potatoes again and the scramble once in a blue moon.

It was a quick and delicious Brinner.
Posted by Heather Tisdale at 05:34