Hello and welcome to Fairy tale Friday. Are you sitting comfortably? Good. Then I'll begin.

We are moving more and more into a modern era in our exploration of Little Red Riding Hood. Whereas earlier versions were very victim blaming, modern versions are more about the power of women.

Tanith Lee is one of my favourite authors. Her stories often have a strong feminist slant and she writes fairy tales as well as science fiction, horror and fantasy. She wrote two episodes of Blake's 7 and was the first woman to win the British Fantasy Award for her novel Death's Master.

This story entitled Wolfland first appeared in her marvellous  collection of short stories Red as Blood or Tales from the Sisters Grimmer. (This book is well worth seeking out if you like dark fairy tales.  It has the most unexpected, imaginative retelling of Snow White I have ever read. It is truly the story I wish had written.)

Wolfland is the story of a young girl named Lisel from a far, frozen country who discovers a surprising truth about her distant grandmother. Lisel is summoned to her grandmother’s house only to discover that her grandmother is a werewolf by night. Her grandfather had been so sadistically abusive, nearly beating her to death, that she ate of the magic yellow flower that turned her into a wolf and she ripped his throat out to save herself and her unborn child. Marriage is a chain that cannot be broken except by death and so she saved herself by killing him.The grandmother says: He knows they are the eyes of Anna and that it is Anna who tears out his throat. She has brought Lisel to her house in the deep snowy woods to give her the gift of lycanthropy to save Lisel from ever having to marry and be forced into subjugation by any man.

The grandmother sees herself in Lisel. She says,
Look at your hair and your eyes and your beautiful teeth. Haven't you always preferred the night to the day, staying up to the morning, lying abed till noon? Don't you love the cold forest? Doesn't the howl of the wolf thrill you through with fearful delight? And why else should the Wolfland accord you an escort, a pack of wolves running by you on the road. Do you think you'd have survived if you'd have not been one of their kind, too?

This is a completely empowering story and one where the wolf is both predator and hero. 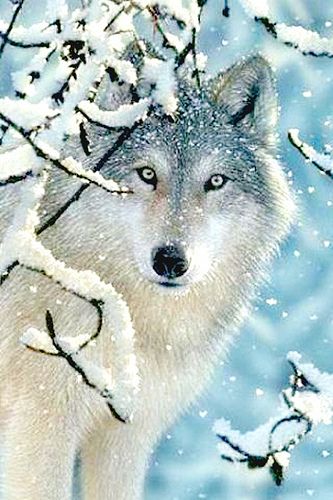 You can read a PDF version of it here: (you will need to scroll to the second page to start the story.)
WOLFLAND

Stay tuned next week as we look what it means to be part of the Company of Wolves.

Posted by Heather Tisdale at 06:33