This week we look at an animated film by Fleischer Studios starring Betty Boop. It was founded in 1921 by brothers Max Fleischer and Dave Fleischer who ran the company until it was bought by Paramount Pictures. Fleischer Studios was the chief competitor of  Walt Disney Productions in the 1930's. 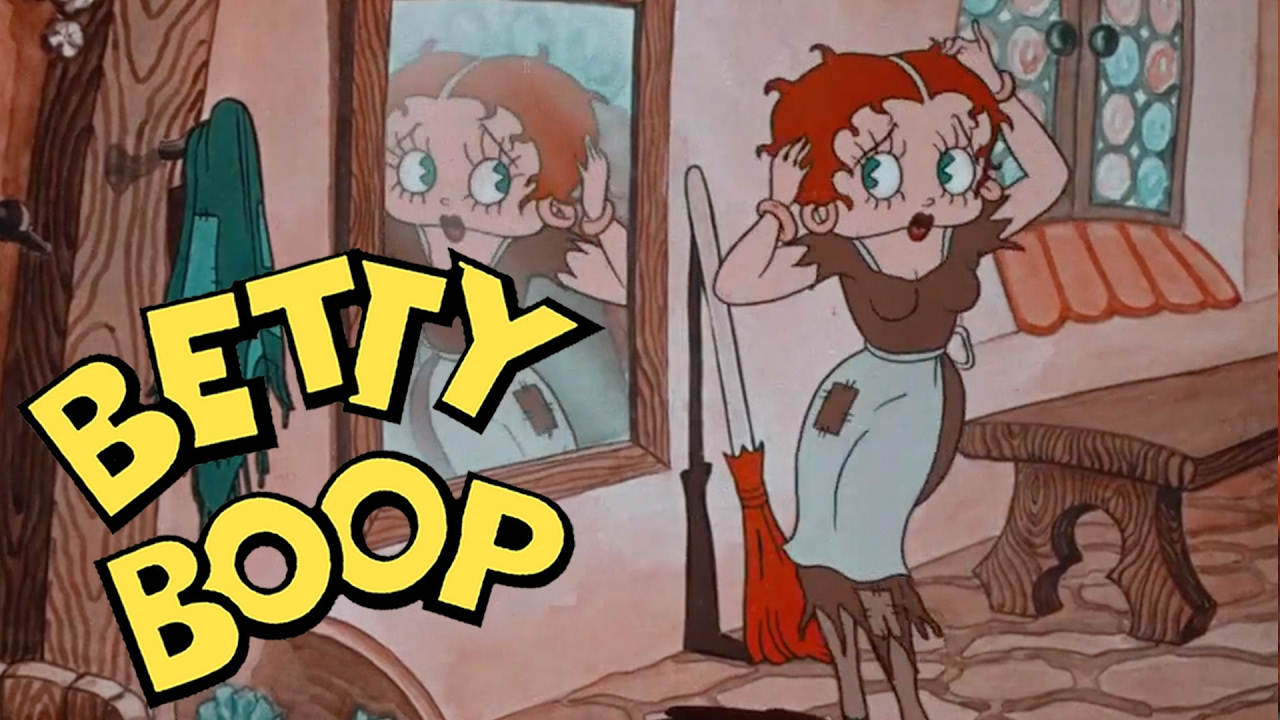 This animated short film starring Betty Boop was made in 1934 and was the first colour film by the Fleischer Brothers.

It is interesting to note that having only seen Betty Boop in black and white, I was surprised to see that they have made her a redhead.

Cinderella (portrayed by Betty Boop) is a poor young woman forced to be the virtual slave of her two ugly stepsisters, who demand she prepare them for the prince's ball while she is left at home to lament her spinsterdom, singing that no one loves her and that her only respite is her dreams, but she holds out hope of being a real princess someday.
NOTE: She has a brief creepy dance with a broom that reminded me of the walking brooms from  The Sorcerer’s Apprentice. The stepsisters are made ugly by large flat feet and rubbery arms with wide shoulders and flat chests.  Cinderella may be wearing rags with patches, but she also manages to do all her work in high heels. There is a great visual montage of Cinderella inside a clock with Roman numerals doing all the cleaning to show the passage of time.

Cinderella is visited by her fairy godmother, who grants her wish to attend the prince's ball, giving her beautiful clothes, a carriage, and the traditional glass slippers, with the warning that she must leave by midnight before the spell expires.
Note: Her fairy godmother appears from a sputtering candle flame. She also magics a lace handkerchief so Cinderella can blow her nose. She asks for a pumpkin, six mice and two lizards who then dance around the drawing room singing with creepily human teeth. Even the pumpkin is glad to be part of the transformation to our help our kind protagonist and a jack-o-lantern face appears and sings in a bass voice that he narrowly escaped being pumpkin pie. The fairy godmother waves her wand and Cinderella’s ragged dress gets shorter and shorter until it disappears. She is left in her ruffled pantaloons which also disappear making this rather racy as she stands in tiny cartoon frilly knickers. A garter and corset magically appear as well as a beautiful dress.

During the ball, Prince Charming, provoked by a mallet-wielding Cupid, descends the staircase in royal fashion and is instantly smitten by Cinderella.
NOTE: After being brained with a mallet, he slides down the stairs to the tune of a swanee whistle. Also, everyone else appears to be cardboard cutouts in the background. I know that this is an animation time saving technique, but it sort of gives the effect that they feel like they are the only two people in the room. Then  a caricature of Rudy Vallee serenades them.

The two have a wonderful time dancing together, but when midnight strikes, she rushes out of the ball, leaving behind her shoe.
NOTE: The ballroom must be on the top floor of the palace as she has to descend several flights of stairs to get out the door. She runs into a mirror she thinks is a hallway then slides down the banister to get out.

The prince proclaims that whoever can fit her foot into the shoe shall be his wife; all the maidens in the land line up to try, with none in the queue able to fit until Cinderella arrives and fits into the shoe easily.
NOTE: It is interesting to note that everyone else seems like they are in a different historical period than she is. They all have big powered white wigs and she has flapper hair and a shorter dress.
Also the way they try on the shoe is unusual. Instead of the shoe being put on the stationary foot, the shoe remains on a pillow and an assembly line of women try their foot in the stationary shoe.

The two are married, and the ugly stepsisters are left to argue with each other until the end title's doors smack their heads together.
NOTE: In the wedding carriage, the prince is *definitely* wearing blue eyeshadow and mascara.

This is an interesting film that is slightly risqué with the near nudity of Betty Boop. Watch it here:

That’s all for this week. Stay tuned next week for a comic reversal.

Posted by Heather Tisdale at 11:51